Top boys stars to watch at US Youth nat'ls 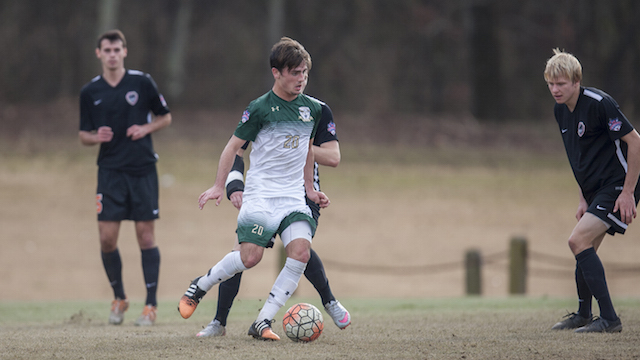 Each side competing in those events has its sights set on advancing to the US Youth Soccer National Championships, the oldest and most prestigious youth soccer championship in the country.

Whether they have already helped their team punch a ticket to Nationals through US Youth Soccer National League play or they are gearing up Regionals, there are several players who have the ability to influence who lifts the trophies this summer in Frisco, Texas. We’re highlighting a few of those impact players who could help their respective teams earn the title of National Champion.

Tyler Kirberg, Valparaiso United FC (AZ) - 2020:  Tyler Kirberg is the latest goalkeeper to help his side go a full National League season without conceding a goal — guiding Valparaiso United FC 02 JG (AZ) to a 5-0-2 record and National League Under-14 Red Division title. The 2020 grad has gained additional experience in US Youth Soccer ODP, as he traveled to Costa Rica in February with the Region IV team.

Quantrell Jones, Baltimore Celtic (MD) - 2018:  Quantrell Jones of Baltimore Celtic SC Christos (MD) has already gained significant international experience with various U.S. Soccer Youth National Teams in addition to helping Celtic to the 2015 Under-16 National Championship while playing up an age group. Jones earned the Golden Glove Award for that performance at Nationals, and he has the potential to earn several more honors in the years to come.

Colin Shutler, Loudoun SC (VA) - 2016 : Jones’ Celtic side had to get past another promising keeper in the 2015 semifinals, as they edged out Colin Shutler and Loudoun 98 Red (VA). Shutler, a Virginia commit, has teamed up with a stingy back line to produce one of the toughest defenses in the National League during last few seasons — including the 2013-14 campaign that saw the Virginia side become the first to concede zero goals. Loudoun finished second in this year’s league, so Shutler and company have already earned another chance to play for the National Championship this summer.

Raul Tinoco, United FA (GA) - 2018:  United FA 00 Elite (GA) is heading to its fourth National Championships this summer, and a part of the team’s recent success can be attributed to Raul Tinoco. The Under-16 defender helped United FA allow just two goals during the 2015-16 National League season, while scoring a pair himself. Tinoco was named an All-Star at the 2015 US Youth Soccer ODP Winter Interregional, along with his brother and United FA teammate, Saul Tinoco.

Timothy Heiduk, Santa Barbara SC (CA-S) - 2015:  A long-time team captain, Timothy Heiduk has helped Santa Barbara SC White (CA-S) play at a consistently high level for several years. Heiduk was named to the Best XI in 2012 while helping Santa Barbara to its first of two straight National Championships. Heiduk can play in the back line or just ahead as a holding midfielder, and he has a knack for finding the back of the net. As freshman at Westmont, he netted three goals and recorded nine starts.

Alfredo Vivar, WAZA FC (MI) - 2018:  Since being a key part of the 2014 National Championship run, Alfredo Vivar has been a steady presence on the WAZA FC East 01 Black (MI) back line. Vivar, who was named to the Best XI during that title run, contributed three goals in this year’s National League. He’ll need to do more of the same for WAZA to qualify for Regionals and make a run at another National title. His US Youth Soccer ODP experience should help him lead from his position along the back line.

Keegan Kelly, Baltimore Celtic (MD) - 2016 : A skillful player who can control the midfield, Keegan Kelly has led a talented list of Baltimore Celtic 97/98 (MD) players who have helped their team be a key player on the national stage for three years. Kelly, a Maryland commit, scored twice during Celtic’s National Championship run in 2014 and earned Best XI honors at Nationals in 2015. Celtic finished one spot out of second in the 2015-16 National League, so Kelly’s side will need to win the Region I Championship in order to get another shot at Nationals.

Jackson Ragen, Seattle United (WA) - 2017 : After helping Seattle United 98 Copa (WA) to the Under-16 National final a year ago, 2015 Best XI midfielder Jackson Ragen is one to watch as Seattle looks to capture a second straight Regional title. At 6-foot-3, he is a threat in the air offensively and a key asset in winning balls in the midfield and defensive third. The Michigan commit also competed at the US Youth Soccer ODP Florida Interregional in the fall and was selected to compete in a UEFA 5-a-side tournament last summer.

Evan Vare, Lehigh Valley United (PA-E) - 2016:  Evan Vare led his age group with nine goals in the 2015-16 National League, as he helped Lehigh Valley United 97 (PA-E) earn its third trip to the National Championships by winning the Under-18 Blue Division. The attacking midfielder, who was named the 2015-16 Gatorade Player of the Year in Pennsylvania, scored twice last year at Nationals, as LVU narrowly missed out on advancing to the semifinals. If he can continue to pace the offensive attack, LVU will once again contend this summer.

Carlos Reyes, United FA (GA) - 2018:  Another key piece of the United FA 00 (GA) string of success is forward Carlos Reyes, who has been among the top scorers in several competitions since his team broke out in 2013. The 2018 grad has twice been named to the Best XI at Nationals and led the Region III Championships in scoring in 2014. Reyes also stood out at the 2016 US Youth Soccer ODP Championships while playing for the Georgia 2000 Boys.

Giovanni Vasquez, Loudoun SC (VA) - 2017 : While Loudoun 98 Red’s defensive prowess was touched on earlier, the Virginia side’s attack runs through Maryland commit Giovanni Vasquez. The Under-17 forward tallied six goals during the National League season to help his team qualify for this summer’s National Championships. After winning the Golden Ball a year ago, Vasquez has a chance to make his mark in Frisco, Texas, as he and Loudoun aim to improve on their semifinalist finish from 2015.

Evangelo Spartiatis, Chicago Fire Raiders (IL) - 2019:  Under-15 forward Evangelo Spartiatis accounted for half of CFA Raiders’ (IL) goal output during the Illinois side’s division-winning campaign in the National League. Spartiatis found the back of the net 11 times — a goal rate that will make him a player to keep an eye on when the Raiders travel to Frisco, Texas, to compete in the National Championships.