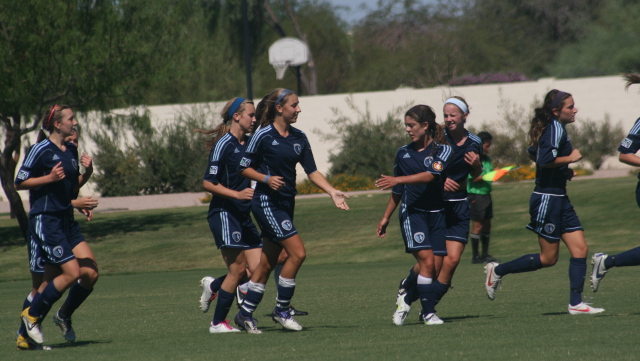 Mergers in all walks of life can be complicated things. You’ve got marriages, new roommates in an apartment or dorm room, business acquisitions, etc.

In the highly-charged atmosphere of competitive youth soccer, where what’s in it for my kid (me) is often the primary evaluating point of everything, mergers can be downright impossible. 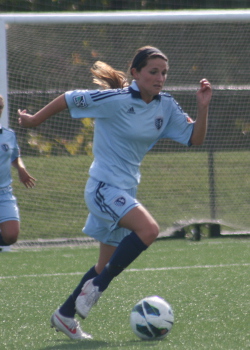 Sporting Blue Valley is a new club in the Kansas City area, comprised of the former KCFC club (which itself had undergone some mergers in recent years) AND Blue Valley SC. The club’s ECNL Director Huw Williams, is bullish on the merger for all sorts of club and player development reasons, but he’s also seeing short-term benefit from it with his U17 team in the vaunted natonal league.

Last season, the KCFC U16 team reached the semifinals of the ECNL National Championships in July. Around the same time, the KCFC Futura side participated in the U.S. Youth Soccer National Championships. While neither side ended up winning the grand prizes they were seeking, it stands to reason that a merger of quality could enhance one of the teams’ opportunities to do so this season. The U17 Sporting Blue Valley team is competing in ECNL this season, and despite a couple of losses at the Phoenix Showcase to powerhouse clubs Slammers (last season’s national title-winners from Southern California) and Dallas Sting, are early leaders in the Midwest Conference standings.

I can attest from my visit to nationals that this was already a team worth watching, and Williams is enthusiastic that the new infusion of talent has made them even better.

“We play a pretty aggressive system with them. We play 3 in the back and that means a lot of responsibilities are placed on our midfield players to do some defending as well,” he said. Every oone of our players on the team, including defenders, are expected to score goals, get assists and be as creative as they can be in attack. The team is made up of fast, creative players who are effective in this system.

“We try to create openings for each other so that players can be effective in 1v1 situations,” he continued. “We try to get behind teams either through penetrating passes or penetrating dribbling runs. The group is lively, dynamic and clever on the ball. I feel comfortable and even confident encouraging them to go at teams. I’m also confident that defensively they can meet their responsibilities.”

Following is a position-by-position breakdown of this season’s starting lineup:

Goalkeeper - Scout Watson: -Described as a good athlete that doesn’t get tested a lot due to the rest of the team’s success. Williams believes she will make a good college goalkeeper somewhere.

Defender – Cristina DeZeeuw: “Allows us to play three in the back. Comfortable on the ball, strong, able to win high balls and a team leader who reads the game very well.”

Defender – Callie Henshaw: Over from the Futura team. “Good in the air but for a girl of her size, very fast as well. To play as part of 3 in the back you have to have pace, and she does.”

Defender – Jordyn Webster: Williams moved her from an outside forward role and she had adapted well. “She is certainly one of our best players. Her tenacity makes life miserable for other forwards, but I just love it when she flies up the flank. She has the green light to do that on this team. We’re at our attacking best when she’s overlapping.”

Midfielder -  Haley Hanson: “She’s an unsung hero, very blue collar. She does a lot of our dirty work, but her technical ability gets overlooked. We have flashier players, but she can take on a national team caliber player either with the ball or in defending 1v1.”

Midfielder - Taylor Walker: “She reminds me of a 1970s Scots midfield player, someone who is constantly harassing the opposition. She allows other players the freedom to go at people because they know Taylor will be covering for them.”

Winger - Dorian Bailey: “She is a creative, attacking player. We expect her to touch the ball a lot. She can go 1v1 with anybody. She usually plays on the left, but you would never know if she is left or right footed as she is equally effective with each foot. She can cross or pull the ball back.”

Midfielder - Elizabeth Luallin: Plays in the middle as the team leaves one wing open for the fullbacks. “She’s not too flashy, but does the simple things correctly for us.” Committed to Oklahoma.

Forward - Savannah Trujillo: “She is very technical. My favorite two things about her are that she always gets a shot off around the box  because she can cut it back both ways, but she is also able to turn and make the slot pass in between defenders for someone to run onto.”

Forward  – Maddie Dieker: “She plays similar to Dorian. She is very creative and tricky on the ball, a great 1v1 attacker. She scores goals for us and is fast and dangerous when she gets behind players.”

Forward – Abigail Sieperda: “She’s one of those players who just scores goals. She can keep getting better in other areas, but for now she just scores. There is no shot too far away, no angle too tight. Sometimes I’ll say ‘Don’t take that shot – ok, you scored a goal.’ She’s sneaky fast, a really nice kid who plays tough and hard-nosed, just the opposite of her off-field personality.”

Williams also mentioned another forward, Alexandria Hess, who is recovering from a broken foot suffered last summer. He compared her to Dieker in style, but noted that with her 6-0 frame, she brings a greater physical presence.

Regarding the merger, Williams said combining the KCFC reputation at the competitive level, with the Blue Valley facilities and recreational base, is a good move for all, noting that while the top level of Kansas City area club has been good, some of the depth in larger markets has been missing.

“With the numbers involved in this club we should be able to compete more consistently through all the age groups,” he said, adding that Sporting Kansas City has also helped with a professional presence that includes coaching seminars.

Another feature of the new setup is a scene at the Overland Park, KS complex, where more than 150 teams are training over the course of a week, from the youngest ages up.

“There is a great buzz out there. The atmosphere is very positive about the merger,” he said. “Sometimes when you try this, egos and personalities get in the way, but I haven’t seen any of that. It has been very positive “