U14 BNT Closes Camp with pair of wins 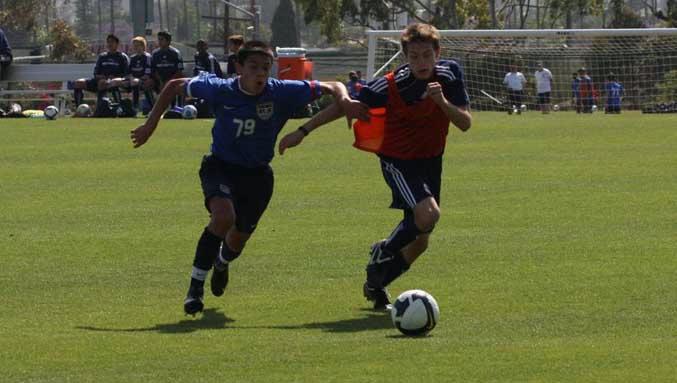 CARSON, CALIFORNIA – Manny Schellscheidt’s U14 Boys National Team closed with a flourish Saturday at Home Depot Center, picking up a pair of wins including an excellent performance from one of its squads.

Schellscheidt liked what he saw Saturday, especially from the first match, where the U.S. beat a very successful West Coast FC team 4-1.

He did allow, however, that the age group as a whole has lagged somewhat behind others, at least in terms of the quantity of quality players.

“I would say in general, not as many talented players. In other years, there were maybe 25 to 28 guys that we could solidly recommend to the 15s to have them in a camp, and then maybe 8 where you say ‘Take a look at them but we’re not so sure,’” Schellscheidt said. “This time around we maybe will get 18 guys from the group and then we’re about what ifs, so that’s a little down from other years.”

Asked if there was an explanation, Schellscheidt admitted he thinks there is. 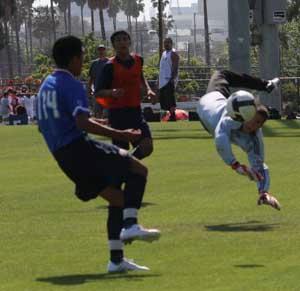 The U14 BNT camp concluded on Saturday.
“I think ODP is kind of fading and even at that age now there are a lot of players who are no longer participating in ODP, but we haven’t found a mechanism to scoop them up in other ways,” he said. “The academies are trying to have things going, but they also have some kind of process for guys of that age. Of course there will be 97s to look at and say they need to be coming into the camp, but they don’t have a process in place. There’s just some scouting and this guy’s talking to that guy. Louis (Matteus, US Soccer Academy Scouting Director) and the academy scouts, they are my best shot right now to scoop up guys from that area. It doesn’t mean Academy guys are telling their players not to do ODP, they just may not be doing it.”

The West Coast team scored in the opening minute Saturday, with Kevin De La Torre putting in a nice, left-footed finish after receiving a good through pass from Willie Velasquez. The U.S. team kept their composure even as the tempo of the match bordered on the frenetic. Surf SC’s Corey Baird and FC Dallas product Emerson Hyndman were linking well, running at the West Coast defense and creating some good chances.

West Coast also remained dangerous, in large part through the running of De La Torre up front and the skilled midfield play of Trevor Hyman.

The U.S. scored an equalizer when Baird won a ball in midfield and touched it to Hyndman, who went on a weaving run down the left, beating two defenders and then pulling a ball back to send it across the 6-yard box from where Florida’s Omar Castro met it with a 1st-time strike to make it 1-1.  Hyndman nearly created a 2nd minutes later with a similar run, but his pass resulted only in blocked shots by Castro and Chicago-area forward Cesar Alba.

Hyndman was causing all sorts of trouble with his work on the ball, and after he drew a foul wide right, he sent in a driven free kick that Baird met near the penalty spot with a powerful header that put his team up 2-1. Rubio Rubin then intercepted a pass deep in the West Coast end before feeding Hyndman for a shot that was tipped wide by West Coast goalkeeper Teddy Czaja.

On the resulting corner, Hyndman sent a good ball in that Baird deftly headed over to the far side of the area for Alba. The Chicagoan delivered an audacious bit of skill, receiving the ball with his back to net, gently volleying over his head and then turning toward goal to meet the ball with another volley, this time with force, for a goal and a 3-1 lead just before halftime.

There was one more goal left for the 2nd half and it was a thing of beauty. Adonis Amaya went on a run down the left wing before hitting a solid cross into the middle. It was met by Baird’s run, but his header was sent against his momentum to the far side of goal with power to make it 4-1.

Baird said the standout play was partly the result of increased familiarity.

“This is the fourth camp we’ve been to. A lot of people have been to all of them and we’re starting to know each other better and how we play,” Baird said. “I was really motivated to play against this team and do my best, because I’ve played them before. We don’t have any weak spots on this team and I think we played very well in this camp.”

A draw looked the most likely result until Michael Clemmons headed home a good cross from PeWee Gibson for the 3-2 win. Billy Stevens of New York was again good in defense. I should point out that I misidentified Billy the other night, when he was excellent in defense for his team. Jeffrey Rhodes and Ivan Alvarado were also good for this squad. Schellscheidt agreed that the 1st match was a much better exhibition of soccer on the day.

The 96s will congregate one last time as U14s this summer, before progressing to the U15 age group.