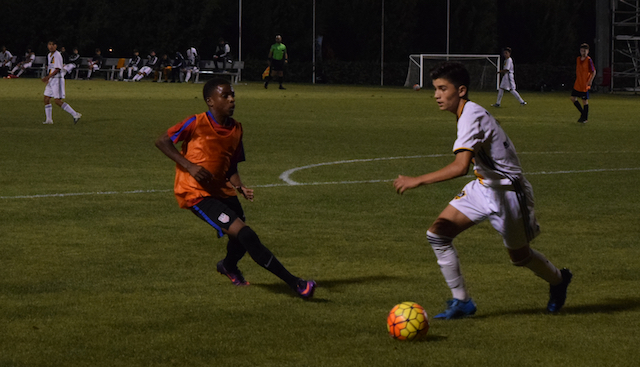 CARSON, California - The U.S. U14 Boys National Team completed its only camp of 2016 on Saturday with three scrimmages against local Development Academy teams. The lone win for the Youth National Team came against LA Galaxy Academy in the second game of the day.

FC Dallas forward Dante Sealy was the star of the show. Sealy scored all three goals in a 3-2 win over LA Galaxy.

Compared to the first game, the U.S. played with a much quicker tempo in the second game. The players had a clear idea of what they were doing in the system and they executed well through the lines. Midfielders Sebastian Burke and Nico Pereira were quick to pick out the runs of Sealy on the right wing.

The U.S. struggled a bit against the pressure from LA Galaxy in the opening phases of the game. The U.S. tried to build from the back, but the quick, direct attack proved more fruitful. Pereira sliced open the defense with a delicious assist to Sealy on the opener. Galaxy had chances in the other direction, as Jonathan Perez helped created chances for the local academy team.

U.S. defenders Bogart Roca and Zachary Sardi-Santos did well in 1v1 situations on the wing, which shut down a few of the Galaxy attacks.

Sealy was a thorn in the side of the Galaxy throughout the game and capped his day with a tremendous goal from 19 yards out after a pair of Galaxy defenders slipped while sliding over to his side to slow him down. The FC Dallas prospect cut in and ripped a perfectly placed shot into the upper corner of the net.

Read More from the U14 BNT Camp: Strikers defeat U14 BNT

Standouts for the U.S. U14 BNT Camp