U14 BNT gets closer to target on Day 2 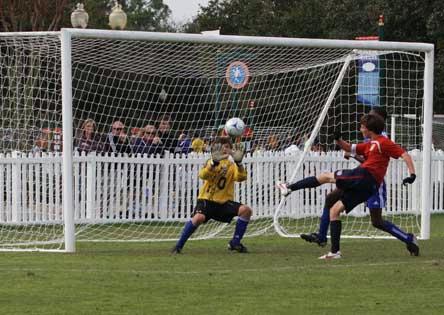 The Navy team, coached by Manni Klar and Louis Mateus, won 1-0 over the Region I 96s on a late goal from Oscar Martinez, set up by Emerson Hyndman. The Red team, coached by Bob Montgomery and Mario Prata, lost 2-0 to the Region IV 96s. The results were a swap from Friday night’s games, where the Navy lost and the Red came out victorious.

The teams return to the field Sunday and close the event on Monday with more matches against regional teams from the same 1996 age group.

Mateus echoed every coach you talk to here by reminding that this event isn’t about the results, but rather the developmental experience of playing high-level matches and the opportunity to evaluate some of the country’s top playing talent 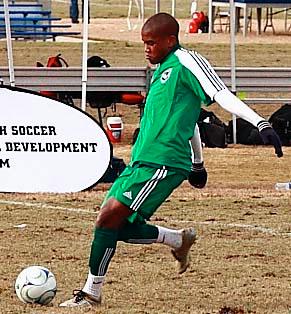 U14 BNT goalkeeper Andrew Ferber makes a save under pressure from Region I ODP player Aleksandar Gogic.
“I thought one of the things I’d like to see better was the finishing. We played well yesterday as well, but we didn’t finish. The positive side about it is that we want kids to play well - to show themselves – and I think they showed themselves,” Mateus said. “The 2nd thing is to create opportunities. Once again we got a result but the thing I’m most happy about is the kids’ style of play. They showed what they have as soccer players.

“We spend time at night speaking with the kids about things, and a lot of what we speak about is the mental part of the game,” he continued. “We are trying to prepare these kids for the next level. Even though it is a good experience for them, winning is not the end result for us. It’s more about finding what they can do and what they can handle at the next level, so that next time they come around they will have experience they wouldn’t get from a normal traveling club.”

Surf SC forward Corey Baird has been good here so far, and he commented that the camp brings out the best in him, by design.

“It’s a lot of fun and it’s really a high level of soccer. Everything is harder, all passes have to be to feet and while in my club team I might get away with some things, I can’t do that here. I have to make sure everything’s perfect,” Baird said. “We want to make sure we get to know people and play better with each other, and to always make opportunities to score goals.”

Fellow Californian Oscar Martinez said this environment encourages players to be on top of their game.

Everybody here in this camp is a good player, so I have to go 120 percent, not 100. One hundred is not good enough. I try my best all the time and when I do I can usually get stuff done,” he said. “Last night we were not focusing enough when the time came to take a shot. Today we had a chance and put it away. At home there’s not that much pressure but here you can’t take too many chances. You have to be ready right away.”

Other good performers on the day for the U.S. included forward Rubio Rubin, who runs well with the ball, Elijah Martin, who has tremendous close control, and Esteban Reyes who is strong on the ball as a right back and runs very well with and without the ball.

For Region I, standouts included Miles Davis, a Virginia defender with good tackling technique; Anthony Viteri, a New York midfielder who is good on the ball; Joseph Swenson, a New York winger with a great work ethic; and Luka Martinovic, a New York fullback with smart reads, quick steps and a good pair of feet.

The westerners of Rolando Uribe got goals from Alejandro Sejovia and Axel Mendez, the latter being a left-footed bomb from 35 yards out. The U.S. team was brighter in the 2nd half, in part due to the enterprising play of North Carolina’s Austin Stamey.