U14 BNT learns from defeats at end of camp 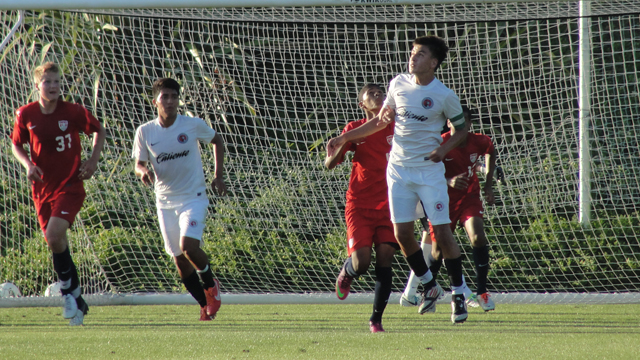 CARSON, Calif. – It was a shellacking and an a** kicking rolled in one on Saturday for the U.S. U14 Boys National Team.

The youngest age group in the U.S. Soccer Federation pyramid of national teams suffered an 8-1 beat down at the feet of LA Galaxy Academy’s U16 squad, and then was kicked, grabbed, tripped on the way to a 2-1 loss to Club Tijuana, which consisted mainly of players born in 1997.

The results were not positive, but the experience was great for both the coaches and the players.

“These are the opponents we need to play,” U14 BNT head coach Hugo Perez told TopDrawerSoccer.com about the game against Club Tijuana. “I like that [the physical play]. We aren’t used that futbol here. They’ll do anything to stop you from getting past – kick you, grab you. But that is part of the international game and we need that.” 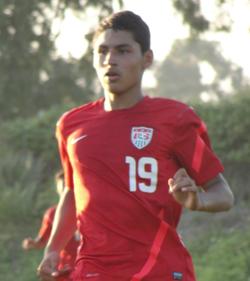 The U.S. dominated the possession for most of the game, but could not breakdown the older squad from south of the border.

Club Tijuana used goals late in the first half and early in the second half to claim the victory at the U.S. Soccer National Training Center. U.S. scored its lone goal with 16 minutes left in the game when Nicholas Taitague whipped in a cross that a Club Tijuana defender kicked into his own net in front of Jose Alfaro.

“When you look at the tape, we dominated in possession. We know that already,” Perez said after the game. “From the midfield up – when we have to put the through ball, the penetration, the 1v1, the one-touch – it wasn’t there. It wasn’t sharp. Or else we could have scored goals, but we didn’t.”

There were chances for the U.S. though. Jonathan Gonzalez, playing in the No. 10 role, had two quality shots from distance that required fingertip saves from the Tijuana goalkeeper to push the ball over the net. Taitague nearly scored off a corner kick, but the referee whistled for a foul instead as a U.S. attacker ran into the goalkeeper to help push the ball over the line.

However, it did not reach the standard that Perez has preached and set with this group.

“We played at 60-70 percent capacity, and even at that, we out possessed the opponent,” Perez added. “But it’s not good enough if you don’t put the ball in the net. That’s why we lost.”

Perez is not one to hide behind excuses, and he was rather direct about where his team needs to mature moving forward.

“The most important thing is the mental part,” he said. “We hardly play teams like this – that are going to play this way. We need to adjust. Today, up top – Lucas Del Rosario, Nicholas Taitague, Adolfo Trujillo - weren’t sharp. We gave them the ball and they did some things, but they were not sharp enough for us to get the ball in the net.

“Our possession was good. Defensively, overall, was solid – how many offside did we play,” Perez added in reference to the high line that caught Tijuana at least a dozen times in the first half. “Those are our foundations, but there are days when we come to play and they are not ready or not sharp mentally. Or they think about Wednesday [an 8-0 win over Arsenal] and these games wake them up.”

Unfortunately, for the U.S., the wake-up call came too late and the attack never broke down the older squad with any consistency. Left back Edwin Lara had the most success on the day with his quick footwork down the flank, but his crosses, when he was not fouled, never found a U.S. attacker.

The scrimmage wrapped up the eight-day camp, which is the final one for the 1999 age group under the U14 BNT tag. The group will reconvene for a domestic camp in late October where it will be title the U15 BNT.

It looked like men among boys in the first game of the day at the National Training Center in Carson. LA Galaxy scored twice in the opening four minutes and cruised to a 8-1 win against the youth national team.

Marc Calderon opened the scoring when he finished off a corner kick in the second minute. The winger ripped a shot from eight yards out that goalkeeper Carlos Avilez could not stop.

Adrian Vera doubled the lead minutes later with a blast from 20 yards out off of a free kick. Avilez left too much of his net open with the positioning of the wall and Vera picked the corner for his finish.

Galaxy nearly went up 3-0 three minutes later when a breakaway led to multiple Galaxy attackers getting into the box for a cross, but left back Sam Vines recovered in time to kick the ball away from danger.

The MLS Academy did not wait long to push the lead to three. Vera scored his second of the game off an assist from Ethan Zubak.

Perez made a pair of changes after the third goal to help regain some control of the game. Utah-native Easton Embley slotted into the midfield and Justin Rennicks was brought in as the new striker.

Like a leaky faucet, Galaxy kept on dropping the goals through. Jorge Ruiz made it 4-0 when he raced past the U.S. defense following a throw-in and then slotted it around the keeper.

U.S. nicked one back when Rennicks stole the ball from the Galaxy keeper and finished into the open net after some questionable passing between the keeper and the center back.

Ruiz finished off the scoring the first half when Zubak played him in behind the defense. The former Chivas USA striker rounded the keeper and dribbled into the open net.

The halftime break brought the longest drought of the game in between goals, which was a nice relief for the nets.

Jesus Nunez, subbed in to start the second half, scored twice in 16 minutes to push the lead to 7-1. Cesar Farais capped the scoring.

U.S. Soccer 2011 Development Academy Coach of the Year Mike Munoz is the new man in charge of the Galaxy and he saw some room from improvement after the squad’s second preseason clash.

“We’ve been working on all defensive stuff for the two weeks we have had the group just to get our base,” Munoz told TopDrawerSoccer.com after the game. “We have a lot of work to do on the attacking side. Possession was not good enough today – at all!”

Munoz explained how he approached the game given the age difference between the two teams.

“Physically, we know we will dominate the opposition, but we need to keep our standards high and not drop to their level in terms of the age. That is the challenge. At times, we did a good job of that, but at times we fell into that trap.”

Galaxy U16 opens the 2013-14 Development Academy at Seattle Sounders on September 21.

From the youth national team perspective, Perez highlighted a couple of players from the first game, but overall said that the quality that he wanted to see was not there from that group.

“The rest are not at the level yet, but we don’t know that until we put them in these types of games,” Perez said. “Now, we have evaluations to do for the clubs so they can start working with them, but most of them were not at that level.

“That also helps us because we have to look for other players who can come and compete with the first group. That is the whole idea about development.”