U14 BNT off to good start at final camp 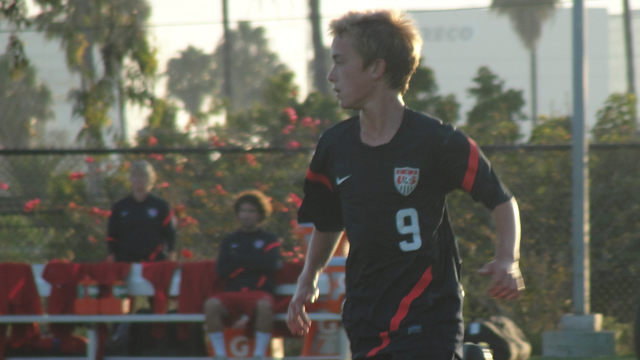 On Wednesday, a handful of players made their claim for that exclusive title with strong performances in the first scrimmages of the fourth and final camp for the 1998 age group. 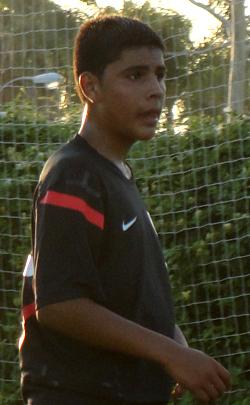 Next week, Perez moves onto the 1999 age group (with a few 2000s mixed in) and this group ascends to the U15 BNT, the first camp is tentatively scheduled for October, with the expectation of the ‘A’ group being the core players for the 2015 U17 World Cup squad.

Before that switch, this group still has some work to do, and Perez is pushing them hard at this camp.

“We practiced three times on Monday, twice on Tuesday, and once before today’s game,” the coach told TopDrawerSoccer.com.

The intense training schedule did not have any negative effects on the group in the games on Wednesday at the Home Depot Center. Perez’s teams notched a win and a draw against older competition.

“We need to play up because it is difficult to find teams this age to challenge them,” Perez said. “Again, I am happy [with the performances] and we have a couple more days to work on some things.”

Arsenal scored twice in the first 14 minutes of the late game on Wednesday, and looked to be on its way to a comfortable victory against the youth national team in the early stages of the contest.

Miguel Duran notched the first goal in the third minute with a nice header from 12 yards out. Josh Goodman provided the assist on a quality cross that was driven into the center of the box.

Twelve minutes later, Goodman picked off a pass from a goal kick and converted the mistake into a goal to double the lead for Arsenal.

“The two goals we gave today were mistakes,” Perez said. “Without taking any credit from [Arsenal head coach] P.J. Brown’s squad, but we made those mistakes because we gambled.

“But we are not going to stop. We are going to continue to gamble until they understand they can play that way and are comfortable playing that way.”

Perez’s use of ‘gamble’ is code for the way that he wants this group to play – without any reliance on a long pass. In essence, he has banned his center backs and goalkeepers from booting the ball long to relieve pressure.

Arsenal’s coaching staff quickly picked up on this fact and put three forwards high on the field to eliminate any options for easy passes to build out of the back, but the U14 BNT would not deviate from the game plan and continue to play out of the back despite the pressure.

After those early jitters, the youth national team had success with finding outlets in the midfield and held the advantage in possession thanks to the hard work of Logan Panchot (St. Louis Scott Gallagher), Luca De La Torre (San Diego Surf), and Christian Pulisic (PA Classics) in the center of the field.

In the 22nd minute, the U.S. had its first chance on goal when Joe Gallardo (Nomads) broke free from the Arsenal defense. Gallardo ripped a shot on goal that required a diving save from the keeper. The rebound slipped out to Pulisic who tried to squeeze it into the near post but was denied by the recovering keeper.

Six minutes before half, the U.S. cut the lead in half off a goal from De La Torre. The tall attacking midfielder side volleyed home a cross from Jonathan Navarro (De Anza Force).

“At half, I told them to go back, circulate the ball, and be patient,” Perez said. “We are going to get the chance.”

While the U.S. dominated the possession in the second half, the chance did not appear to be coming for most of the half. Outside shots from Joshua Perez (Chivas USA) and substitute Eric Calvillo (Real So Cal) were the most threatening opportunities before Perez went on one of his charging runs through the defense.

In the 70th minute, Perez, the coach’s nephew, intercepted a lazy pass about 45 yards from goal. With only green grass in front of him, he set off on a tear. Arsenal’s defense failed to close down the space and the starlet of the Chivas USA Academy put the ball on his left foot for a thunderous goal that took a slight deflection from 20 yards out.

The final ten minutes played out without either team finding the go-ahead tally.

“That first group . . . I still feel there are some special players there,” the coach said. “I was happy with the performance.”

Perez, the coach, added that there are some things he still needs to work on these players.

“I would say now one of the biggest things for us is to work on things in the final third of the field. Not necessarily to score, but to work on more one v ones, more combination play.”

The score line was a bit flattering to the YNT, as Downtown SC Premier, which was a late replacement for Chivas USA, had some quality chances to score throughout the game but could not put the ball in the net for one reason or another.

Hugo Perez tipped his cap to the opposition, which is coached by LA Galaxy great Mauricio Cienfuegos, with a postgame remark about how Downtown really tried to knock the ball.

Overall though, he was pleased with his squad and what he saw beyond the goals.

“I think the group accomplished what we were looking for in how to play – in the buildup and the confidence,” Perez said. “So I think with that group, it was positive.”

Isaiah Young (Penn Fusion) opened the scoring with an overhead kick into an empty net in the 23rd minute. Downtown’s goalkeeper came off his line to clear a free kick by Alexander Soto (TSF). The keeper’s clearance went nowhere and Young grabbed the opener.

Just after half, substitute Charles Wehan (United FC) tallied the final goal. Edwin Quiroz (Crescenta SC) raced down the touchline and delivered a cross into the middle of the box. A defender knocked it down and Wehan put it away from eight yards out.

Despite three new names to the group scoring, Perez was reluctant to single out any individual performances.

“They’re good players that is why they’re here,” the coach said. “The problem with the new players is that they need to get used to certain things.”

One of those players was Wehan who had the makings of a sizzling debut with his performance early in the second half. The attacking midfielder had everything that the game needed – a player willing to make the pass into the final third through traffic.

Wehan set up a handful of chances with his movement off the ball, and his incisive through balls to Albizar.

But then, he fizzled. Wehan looked like he lost his steam a bit over the last ten minutes of the game. Perez chalked it up to the adjustment to this level, and did not put much weight into what he saw in either the highs or the lows.