U14 BNT open camp at the ODP Interregional

The two teams in the squad will be playing regional counterparts from their 1996 age group. The ODP regions this year feature two teams each, with one for players born January through June, and another for players born July through December. The concept is designed to combat a real or perceived bias toward older  and likely more physically mature players in regional tryout selections. The U14 BNT squads will only play the older age group regional teams, but there is a whole slate of games here for the regional teams (95s and 96s) to play each other on the weekend. 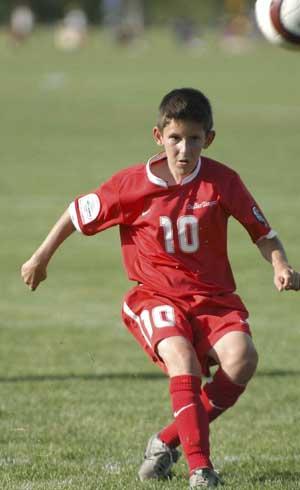 U14 BNT member Emerson Hyndman
We will have more details on games from Saturday and Sunday, but here is a brief look at Friday’s results.

DeAndre Robinson, a faster winger from Lawrenceville, Georgia, scored in the opening minute to put the southeasterners on track for a win. Californians Oscar Martinez and Corey Baird combined for a 2nd half U.S. equalizer, as Baird ran with the ball and slotted a nice pass for Martinez, who finished with accuracy to make it 1-1.

Region III got a winner from Florida’s Arthur Paterson in the 2nd half to take the win. Florida keeper Nicholas Zedan put forth some good saves to preserve the win. Region III also got good play from Dallas Texans’ midfielder Ivan Alvarado, who is very good on the ball.

For the U.S., Emerson Hyndman was dangerous in the middle, running well with the ball and making a lot of dangerous short passes. Arsenal FC’s Joab Santoyo delivers the ball well, while fullback Wilfred Williams showed good skill, positioning and toughness in the back.

This U.S. team got goals from Virginia players James Ellis and Jorge Calix in the 1st half, then rode shutout work in goal from Andrew Epstein and Gianni Carillo.