U14 BNT Squads square off as camp closes 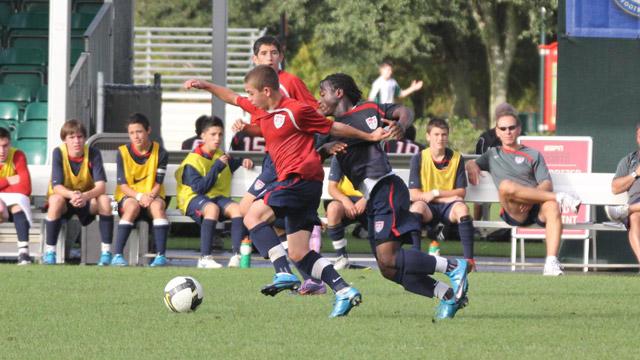 LAKE BUENA VISTA, FLORIDA – A 2-2 draw was a fitting end to the week here at Disney’s Wide World of Sports as the U14 Boys National Team played an intrasquad scrimmage.

{mosvideo:350}Manny Schellscheidt’s team has gone undefeated against regional teams thus far, and so it turned out nobody lost that distinction due to the 2-2 draw, played with just 30-minute halves at the end of a long week.

As always, Manny stressed afterward not to peg anybody as the next superstar or even a national team player, adding that the selection/identification process is still open, and that even the best performers here have a huge amount of developing to go through.

In the match, legs were tired but a number of players showed a  pretty good bit of energy anyway. Gedion Zelalem showed some good ball-winning and passing qualities for the Red team, and played Christopher Gomez in on the left for the best early chance for his team. Navy goalkeeper Nicolas Pritchard was quick off his line to block the shot, but Gomez tapped to Malcolm Dixon who was unable to keep the 1st-time strike on target with the goal open.

David Villegas fired wide early on in Navy’s best opportunity to that point.

A misstep on morning dew gifted Christian Lucatero of Houstonians with an early chance. The fast forward ran 50 yards with the ball and then chipped the onrushing goalkeeper 1v1 to put Navy on top 1-0. Billy Abdallah for Navy and Josh Cox for Red turned in some good defensive play on the morning. 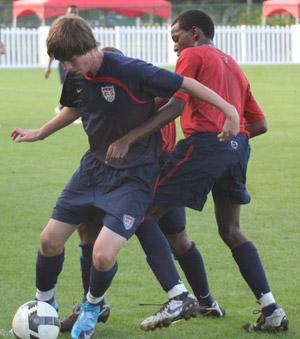 U14 BNT players battle for posession.
Red equalized late in the half when Zelalem played a good pass to meet the diagonal run of Malcolm Dixon and the New York Red Bulls forward finished well across his body to make it 1-1.

In the 2nd half, Benny Swanson continued his good play this week by winning a header off an opposition goal kick and directing it to Amadu Kunateh.

The Boston-area forward volleyed the ball over his head to put the ball in the path of Stephen Elias, who just beat a defender to the ball and struck it into the back of the net for a 2-1 Red lead.

That looked like the final score until just before full time, when Chester Castellaw ran 50 yards through the middle with the ball, played a 1-2 with Lucatero and then buried his finish for a final score of 2-2.