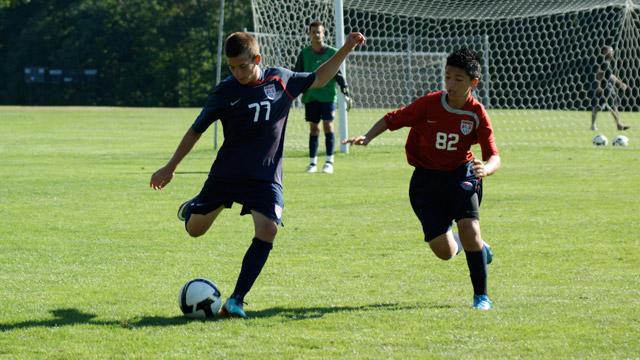 LAKE BUENA VISTA, FLORIDA – Manny Schellscheidt’s U14 Boys National Team  picked up a pair of wins here Friday as the U.S. Youth Soccer Boys ODP Interregional began at Disney Wide World of Sports. We will be covering the event through Monday’s games.

A tremendous strike by Coy Craft was the difference in the contest. The midfielder from rural Virginia and Tennessee club Fusion FC intercepted a pass and let go with a 35-yard rocket launch that left the goalkeeper with no chance in the 1st half. Craft had a good match overall, as did fellow midfielder Chester Castellaw, a Real So Cal product who spoke with us afterward.

Standouts for Region IV on the evening included Luis Carbajal and Christian Segovia, both of Southern California. The match was played in a mostly-steady downpour.

The squad coached by Bob Montgomery and Mario Prata took a while to get going but when they did, showed an impressive attacking display.
Region II goalkeeper Parker Siegfried was excellent in the opening 35 minutes, coming off his line decisively on more than one occasion to snuff out a threat, and making a couple of good saves on Christopher Gomez and Amadu Kunateh of the U.S.

Early in the 2nd half, Sean Wilson of PDA sent in a corner that set off a scramble in front of goal and Benny Swanson of Columbus Crew knocked it home from inside the area for a 1-0 lead. A ball cleared out of the back led to Chicago Fire’s Shannon Seymour flicked a header on to put Malcolm Dixon of New York Red Bulls behind the defense. Dixon showed blazing speed to cover the final 50 yards before finishing well in a 1v1 situation to make it 2-0.

Dixon scored again to provide the final scoreline, this time after some excellent work on the ball by Mukwelle Akale of Minnesota Thunder.

Dixon and Seymour were happy with the team’s performance

Coach Bob Montgomery, also with New York Red Bulls Academy, credited his team with picking things up as the match went on.

The teams pick it up again Saturday, with Region I and III getting into the action and 1996 birth year ago group regional teams also competing.