CARSON, California – Hugo Perez is a busy man these days.

On Saturday, Perez wrapped up camp with the U14 Boys National Team for the 1998 age group. It was the final camp for that group before it transitions into the U15 BNT.

One day later, he was kicking off another camp, with the 1999 age group descending on the Home Depot Center for its first camp in the youth national team structure. While the player groups are divided by calendar year, the cycles for the teams begin and end according to the traditional school year.

“It is about identifying talent first,” Perez told TopDrawerSoccer.com about the goal of the camp. “We are taking the first baby steps with them to understand how our system is going to be and our style.” 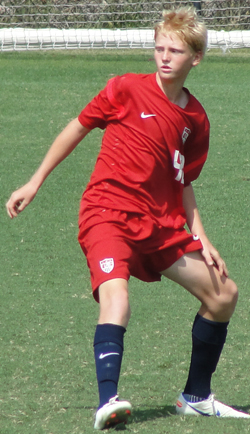 The first two days of camp have been focused on slowly building up the practices from individual to small group to team exercises. Tuesday focused on possession for the midfielders and defenders while the wingers and forwards did some finishing drills.

“In the sessions, we started with a triangle yesterday,” the coach explained. “Today, we worked on a diamond so they could get their positions. These are the first steps.”

Perez went onto say that it took four camps for the last age group to really get the idea, so he is not expecting this style to catch on immediately with the new group.

“It is their first time doing this, so we just want to make sure they have the idea down. It is okay to make mistakes as long as they get the idea down.”

Beyond the tactics of the system, Perez really wanted the group to understand the importance of keeping possession. From the 4v2 exercises to the full field drills, the coaching staff put the focus on moving the ball without just booting it forward.

“The goalkeepers have already been instructed there will not be any punting,” Perez added.

During Tuesday’s training session, it definitely appeared to be a big adjustment for some players who are not used to this style or the focus required to hold possession. However, a few players have already caught on quickly.

Vincent Borden, a midfielder from New York who joined Croatian club Dinamo Zagreb last spring, stood out on the day with a soft first touch and solid understanding of moving off the ball.

“It has been fun,” Borden told TopDrawerSoccer.com about the camp.

“I just moved to attacking midfield for the final half of last season,” Borden said. “Prior to that, I played defensive midfield and center back.”

At this point, the positions are fairly fluid with this group as Perez looks over the players that he has in camp, but Borden already showed characteristics of a promising no. 6 for the future.

When asked to explain the difference he saw in the first few days of camp compared to the training at his club, he talked about the mentality of the other players.

“They play a lot of pressing. In Croatia, it is smoother with more passing.”

Perez’s style tends to blend those two elements, as the coach likes to focus on winning the ball back quickly and then letting the other team chase the game. But it might be a while before the team reaches that goal.

For now, Perez is building up the pool of players.

“By the third camp, we will have a very good base. We will see more players [between now and then]. We think we will have a nucleus of players that will be coming here, but right now is the first step and we will see what happens.”

The U14 BNT returns to the field on Wednesday for a pair of games against Cal South ODP and the Fullerton Rangers. Perez said he already split the roster into three teams. Two teams will play 40 minutes each while the third group will play the full 80-minute game.

With most of Tuesday’s practice devoted to instructions and tactics, it was difficult to get read on all of the players, but a couple did stand out for one reason or another.

Center back McKay Eves (Las Vegas Heat, Las Vegas, Nev.) is the tallest player on the roster at six-feet tall, despite the height for a 13-year-old, he is actually very smooth on the ball. He has a good first touch and knocks the ball with pace. Without any games on Tuesday, it is difficult to judge how his marking will be, but he seems to fit into Perez’s style rather easily.

There is an overabundance of players vying for the defensive midfielder position. Out of the fifty-player camp, seven of them lined up for the no. 6 role.

Timothy Weah (Cosmos/Rosedale, N.Y.), the son of soccer great George Weah, is in this camp, playing up a year. Weah looks to be a winger and showed some ability in front of the net during the finishing drills. Forward Giovanni Calixtro (Westside Timbers/ Gervais, Oregon) and midfielder Christopher Goslin (UFA Elite/Locust Grove, Georgia) are also players born in 2000 who are playing with the 1999s.