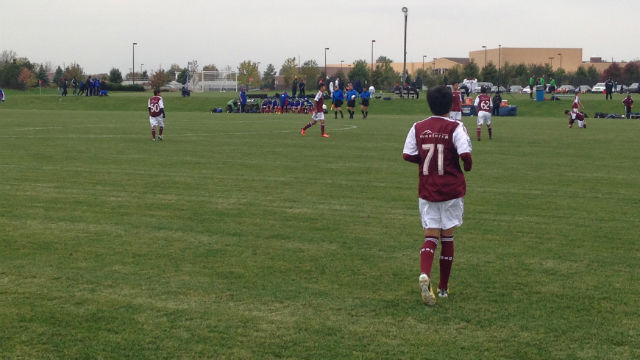 But there was still good soccer to be seen in all corners of the Shelbourne Soccer Complex as some of the strongest youth teams and players in the country faced off. Here are some highlights from among the 13 games played Saturday.

After going behind in the first half, FC Dallas scored twice after the break to come away with a 2-1 victory in one of the day’s first games. The win came on the back of a superb performance from Manuel Molina, who scored once and created a late winner.

Early on the Rapids had control of the game through their domination in midfield. Eric Morales was a calming influence with his ability to hold up play and pick out simple passes quickly, and when Dallas did manage to mount an attack, the centerback partnership of Evan Austin and Jack Parham were able to subdue the threat.

But as the half wore on Dallas started to build pressure through Molina and striker Abelardo Escalante-Torres, and a goal looked inevitable. One came just before the half – but it was Colorado scoring, with Moises Martinez bundling home a broken corner kick play. Almost immediately after that the Rapids had another chance as a penalty was given, but the Dallas goalkeeper saved it, keeping the deficit at one.

Shortly after halftime Dallas made a change, with Robert Suarez coming on to play on the right wing, and from there the Dallas offense was off and running. With less than half an hour to go, a stroke of pure skill from Molina leveled the score, as he bent a curling shot from the top of the box in for the equalizer. Fifteen minutes later Molina turned provider, putting a cross right in front of goal for Suarez to slot home. The Dallas defense held on, with Andrew Contreras clearing a late Wilmer Cabrera shot off the line to preserve the victory.

Man of the Match: Manuel Molina

It was a game of two halves, as Solar Chelsea scored twice in the first stanza to take a commanding lead, but after the break Chicago Magic PSG’s potent offense stormed back to put the match on level terms.

The Magic looked to have the upper hand during the game’s opening stretches, as their front four attacked Solar’s back line again and again. Dominick Skrip in particular looked dangerous, but Rade Novakovich and Martynas Biskis were just as threatening. Late in the half Solar found success counterattacking down the right flank, with Jose Zertuche bringing the ball out from the back and overlapping with winger Jacob Capdevila. The latter scored Solar’s first goal on a play like that, and right before halftime he assisted David Engleman to double the lead.

After the first half Skrip was replaced by Ronaldo Diaz for Chicago, who proceeded to take control. Solar looked good for their lead after appearing a bit overmatched early on, but Diaz pulled one back against the run of play to make it a 2-1 game. Not long before the final whistle, Diaz struck again – after an Adrian Corona cross from the right flank found its way to the far post, he was there to finish. It was a brace for the substitute, who alongside Corona took control of the game in the late stages.

Man of the Match: Ronaldo Diaz

Minnesota Thunder dominated much of the possession, but a strong Texans defense stopped them from creating as many chances as they might have liked. And while Thunder got their goal, the lead was threatened again and again by an athletic and talented Houston front line.

During the game’s early stretches, the Texans had much of the possession, knocking the ball around in search of openings. But after failing to create any chances in front of goal, Minnesota crept into the game, stringing together long stretches of possession with a sound, technical passing game. Much of the play flowed through Minnesota’s number 10, Elias Draves, whose reading of the game and touch were on par with his superb distribution.

But while they could keep the ball better, Minnesota were kept from going behind mostly by goalkeeper Dominick Palaty, who thwarted several early chances. It just takes one breakthrough, though, and Minnesota found it just before the half through build up play from Draves and Michael Vang, leading to a powerful finish by Thomas Katsiyiannis.

For the first twenty minutes after the half Thunder were able to hold Texans at bay through possession, but as the game continued, momentum started to shift. Both teams began to foul, and again and again it appeared that Houston would break though. But the Thunder defense and keeper didn’t break down, and they were able to preserve that goal until the final whistle.

Man of the Match: Dominick Palaty

Probably the most even game of the four, with both teams creating chances equally, and both teams defending well throughout – with the exception of a single play, late in the game.

The early stars of the match were mostly defensive – the Colorado centerbacks, Scott Forsyth and Bailey Heller, were particularly good at quelling Vardar moves, and Shamik Patel did the same on the left side of the Vardar defense. Late in the first half Keith Larson started to come into the game a bit for the Vardar attack, with strong dribbling and movement going forward. But neither team seemed able to complete an attack.

In the final twenty minutes of the game Real Colorado began to show their ability going forward as well, after bringing on Matthew Kintzle. His teammate Damen Marcu foreshadowed what was to come by hitting the post with a strong shot, but still neither team could muster a goal. That is, until the 66th minute, when a defensive mistake proved costly for Vardar. A shot was saved by the Vardar goalkeeper, but as the ball ran free, he collided with a defender, allowing Marcu to pass the ball across the six-yard box to an open Matthew Hundley to score. It was unfair to a defense that had performed admirably, but ended up as the deciding moment of the match.

Man of the Match: Damen Marcu