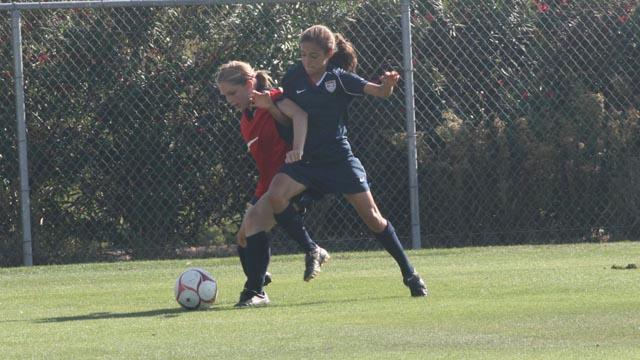 The U14 Girls National Team training camp held this week concluded Friday at the training fields of the Home Depot Center with an intra-squad scrimmage. It was the final opportunity for players to show Coach Michelle French what they had learned throughout the week.

“It was good to see the concept that we had been working on in camp come into play for the final game. That is what you hope to see,” French said. “There wasn’t a lot of coaching today. The girls just had to sort and communicate things out on their own and I though they did a really good job. “

The training staff purposely switched the line-ups around, having defenders mark forwards that they had previously played with, which made the game very entertaining for staff and spectators present.

The marquee match up was between probably the best defender in camp, Southern California’s Annia Mejia, going against the strongest forward, Washington state’s Mariah Lee. They marked each other for the first half and both consistently stood their ground. 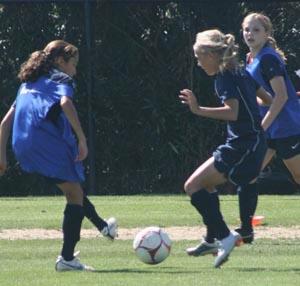 Camp concluded with an intra-squad scrimmage.
“I think they both got the best of each other a couple of times. You expected that and want to see it,” French said. “They are going to have successes and failures, but when you get two really good players going against each other, it’s always going to be a battle. It was good to see.”

It really was. Mejia consistently broke up possible through balls and deflected several shots, while Lee used her speed and strength to beat her defender, or create a dangerous cross.

Another forward that added a threat to the opposing team was Michigan native, Rilka Noel. She might not be a flashy player, but she isn’t afraid to take on a defender alone, and she uses her speed and fantastic footwork to get herself inside the 18-yard box and create good chances.

The game also exhibited the perfect example of what an outside back should do throughout the game. South Florida’s Hannah Coy started the game as a right back and finished as a left back. Regardless of her positioning on the field, she mastered the ability of moving up and down the flanks in the perfect moments, to add options to the offense.

“It is something we talked about with her this week, to keep Hannah’s runs going after she plays that initial pass. Today she did it extremely well,” French said. “When she got forward she was able to get crosses off and draw out the defense.”

One player that had early success in the camp and showed today it wasn’t a fluke was Houston-area standout Haley Pounds. She was able to drive through the defense and take good shots on goal, including a couple that went slightly wide, and another that forced an acrobatic save from the goalkeeper.

“She has been that player that stood out as a game changer,” French said. “You like to see a player to be consistent throughout the week and continuously create chances during games, and that’s what she did all week.”

The final score was a 2-1 affair, a fairly low score due to the great performances of all four goalkeepers. Case Murphy, Abigail Pyne, Kelsey Dossey, and Alexandra Nicholas took on players one on one and prevented many scoring opportunities. All the keepers were comfortable on dead ball scenarios, snatching balls out of the air.

Their distribution out of the back was very smart and there wasn’t any hesitation in communication as they consistently called out their backline to position everybody when needed.

“The goalkeepers have been battling it out all week, so I couldn’t pick one,” French said. “They all have great range and can make good saves with good extensions. It’s great they can cover so much of the goal.”

Others who never let their performance drop were Austin-area standout Mikaela Harvey and Colorado Rush talent Betsy Brandon. Harvey continued to be cool and composed with the ball, she was able to get forward more often this time, even having a shot clink of the crossbar. Brandon only played a half but did a great job connecting the defense and the strikers as a point of attack.

For these girls, experiencing their first national team camp was something that they didn’t take lightly, as a chance of a lifetime. And for the trainers, it was a chance to see the future of women’s soccer in the U.S.

“We chose these kids from the Identification Camp and we just want to find the best players across the country,” French said. “The only way we’re going to be able to do that is to hold camps where we can bring these kids in to compete against each other.

“For me it was to be able to get a better understating on this group so that when we go out and scout other places across the country, we know what the bar is.”

In other words these girls have set the standard of what the women’s game will be for the next generation. And if they want to continue to be the cream of the crop, it is important for these players to understand the central message that Coach French has instilled all week.

“Everybody has to continuously improve its technique,” she explained. “The first touch to help you prepare where you want to play, the ability to clean the ball up out of the air with ease, to be able to beat players on the dribble, or be able to play different types of service.

“If we can get players out on the field to become comfortable with the ball and calm with the ball,” she continued. “I think our country’s teams will be a lot better off.”
Related: Players To Watch,