Youth World Cups are cyclical, but talent is not.

This is why U.S. Soccer Director of Women’s Development Jill Ellis is examining the U14 Girls National Team for potential players to make a difference with the next U17 Women’s World Cup cycle. 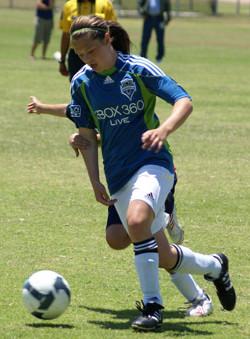 “I think now that we have the youngers [the 1998s] – the special, special ones - playing with olders [the 1997s], we can pick from two birth years instead of just one, as it has been in the past,“ Ellis told TopDrawerSoccer.com.

Barring an unforeseen addition to the 2012 U17 WNT roster, head coach Albertin Montoya is likely only going to take two players born in 1996 (Gabriele Miranda and Sarah Robinson) to the World Cup out of a 21-player roster. Montoya’s roster is expected to be announced next month.

Balancing the birth years on the rosters depends on the talent, and Ellis believes that the current U14 GNT has the makeup to put a handful of players in the discussion for the next U17 cycle.

Those specials players showed their stuff during last week’s U14 GNT camp at the Home Depot Center, the second camp of the year for the youngest youth national team age group.

Ellis highlighted Mallory Pugh (Real Colorado) and Madison Schultz (Northwest Nationals) to illustrate her point about pushing these players to compete with the older age group.

Both Pugh and Schultz have already played with the U15 Girls National Team this year, and will likely be part of the U15 team when the two age groups train together in North Carolina later this fall.

“I think based on this, there will probably be four or five ‘98s that get a look with our ‘97s,” Ellis concluded.

While Ellis only talked about Pugh and Shultz as the potential pieces to move up an age group, there were also other players that made a statement during the scrimmages at last week’s camp for playing up an age.

The Five to Watch

Mallory Pugh – the dynamic attacker has already appeared with the U15 GNT and looks to be a player who can help add to the attack with that team. Her speed and non-stop motor are her best attributes, but she is also very good on the dribble while running at defenders.

Madison Schultz – the target forward showed well earlier this year with the U15 GNT. Shultz handled the physical defending with ease and linked with the wingers on multiple occasions. With space, she can turn and punish defenders with a nose for the goal.

Mary Alice Vignola (Ohio Elite) – the forward turned outside back has been a fixture with the A team for this age group. She has the wheels to get up and down the flank and join the attack, which could be enough to push her into a spot with the older group at the next camp.

Carly Malatskey (Slammers FC) – the center back is like a pit bull on the field with her determined effort to shut down the opposition’s attack. She is strong on the tackle and pretty good with her distribution out of the back.

Taylor Ziemer (Santa Rosa United) – the center midfielder is a long shot to make the jump at this point. Ziemer was a new addition to last week’s U14 GNT camp and is still low on the depth chart for her position, but she showed the signs of a player capable of playing against much older competition. She controlled the pace of the game in the scrimmages and helped facilitate ball movement better than any other midfielder.