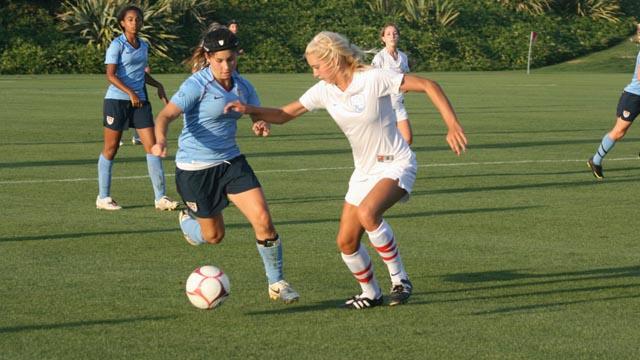 CARSON, CALIFORNIA - Past the halfway point of training camp, the U14 Girls National Team had its second day of scrimmages, hosting both the U14 and U15 Cal South Girls ODP squads at the Home Depot Center.

The progression of experience from training camp was evident in the U.S. team’s play, which was very much improved from Monday scrimmages. Both teams showed better understanding and their match play had more flow to it.

“Any time you can play some of the best kids in California it’s a good thing,” said coach Michelle French, who is overseeing the squad for this training camp. “I think the overall organization was a lot better. The past couple of days we’ve been working on how to play a specific formation on both sides of the ball and the girls are grasping it very well.” 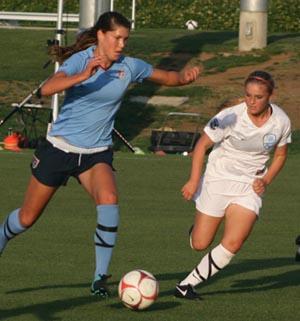 Day 2 was better for the U14 GNT (blue).
One of the players that had the biggest improvement was Southern California’s Annia Mejia. The defender had more confidence coming into today’s match and she made her presence felt by breaking up plays and not allowing the forwards to get behind her.

“That comes with a couple of days of practice and kids getting comfortable,” said French of Annia’s play. “We have been stressing communication and that was a big part of her better performance.”

Annia didn’t look like a newbie at camp, yelling at her back line to keep formation and starting attacks from the back very intelligently.

Challenge SC standout Mikaela Harvey continued to impress. She showed great field awareness and a fantastic first touch. She is always composed in the midfield, regardless of how tightly defenders mark her. Harvey also tallied a nice goal from a difficult angle.

“Her ability to relax when she has the ball is a great asset she carries,” commented French.

Converted defender Shelby Fredricks also had a great night that included slicing through the defense to score a goal. The Long Island resident has great poise with the ball at her feet and the footwork to break out of tight situations and create space from which to operate.

The versatility of PDA’s Meaghan Mulligan is impressive. She was shifted from right back to the midfield and dropped back to the left back spot by the end of the game. Despite being a player who doesn’t normally play in the back, she was one of the most consistent defenders on the field.

Also worth noting was the play of Colorado Rush standout Betsy Brandon, who French noted had a good sense of when she needed to play the ball forward. Her quickness and movement of the ball was her best attribute.

The U14 GNT went perfect for the night, beating the U14 and U15 Cal South squads, 3-1 and 2-0, respectively. Training camp will conclude on Friday with an intra-squad scrimmage, and TopDrawerSoccer.com will be on hand with the coverage.