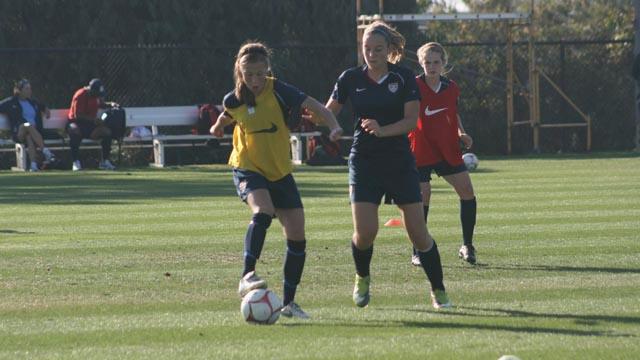 CARSON, CALIFORNIA - The first day of scrimmages got underway for the U14 GNT training camp, as it hosted South Bay Force and Real So Cal here at the training fields of the Home Depot Center.

It would be hard to expect perfect soccer from this group of girls, who are experiencing a national team training camp for the first time and have only been training together since this past weekend. 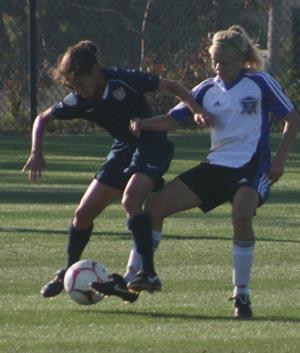 A GNT player controls the ball on Monday.
The first match, against South Bay Force showed a tentative U.S. defense that found itself out of position in the first half.

“Three of four [players] don’t play in the back, that’s why the defense was all over the place,” explained Michelle French, who is running this week’s camp.

The player from the U.S. Red Team that stood out the most in the back was Mariah Lee. She was strong and able to hold on to the ball very well, timing her runs up the flanks very well and using her strength to strip the opposing forwards of the ball.

After halftime she was moved up front and then showed her attacking prowess, slicing through defenders and using her speed to create space for dangerous crosses.

“She was more effective as a forward because it was her natural position,” said French. “As soon as she got into her comfort zone she was able to make a lot of things happen.”

Midfielder Haley Pounds’ mobility on the ball and uncanny ability to turn her opponents helped to open up the field of play.

The overall result was the U14 GNT going up to a final 4-2 against South Bay Force.

The second match up saw the U14 GNT Blue Team strike early from a defensive mistake by Real So Cal’s goalkeeper.

The notable play of Sabrina Flores was very clear. The 4’10” defender made her presence felt, picking off passes and finding space to start the attack. She’s a speedster that isn’t afraid of going 1v1, occasionally she would get sucked into the middle of the defense leaving space for opposing runs, but would quickly recover.

Mikaela Harvey was the spine of the Blue Team, being the main link between the defenders and forwards, while occasionally zigzagging through the defense and getting looks at goal, one which she buried.

“She’s really mobile in her ball skills and individual techniques,” said French. “To have someone that has that great control of the ball in the midfield is particularly really helpful to connect passes.”

In the end the Blue Team came out on top with a 3-1 victory.

“They all did really well,” said the French. “The team strung together lots of passes and created several opportunities.”

The U14 GNT will against have another doubleheader on Wednesday.