U14, U18 groups primed for ECNL Finals 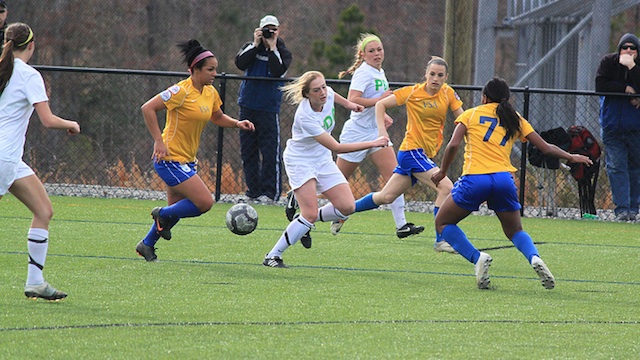 The ECNL is about to plunge headfirst into the postseason. After a full season of action and a handful of national events in the rearview, the nation’s best squads converge on Seattle from June 24-29 to decide fates. For the U15, U16 and U17 ranks, Seattle only represents a stepping stone. The best teams from Seattle qualify for Richmond in July, where they’ll vie for a national title. Meanwhile, Seattle is the last stop for U14 and U18 teams, with each age division crowning a winner from the recently announced groups.

Today, the attention swings to the U14 and U18 National Finals, the pinnacle of competition for girls soccer in the U.S. in those age groups. The four groups in each age division represent the cream of the national crop, and a few groups present some intriguing matchups.

In the U18 ranks, both Group A and Group B are massive. Group B features three group winners with a combined four losses all season. That includes group favorites Michigan Hawks, which is sopping with talent and hasn’t lost a game all year. Group A is similarly tight. PDA is generally considered the best U18 team in the nation, and its 16-0-0 record during the season and nearly impossible 76-3 goal differential attest to its quality. Even so, D’Feeters comfortably won the Texas Conference with a 13-2-3 mark, while McLean ran away with its division with 38 points from 16 games. PDA may be favorites to win the entire tournament, but they’ll be pushed out of the box.

The U14 ranks are similarly well-stocked. In terms of points, Charlotte SA was the nation’s best team in the regular season with 63 from 22 games, and their mettle will be challenged immediately in a rawhide Group A. Bethesda SC still hasn’t lost a game this season, while PDA and Santa Rosa should give chase. Group B looks like the deepest of the lot, led by group-winners Solar Chelsea and World Class FC, one of the nation’s best U14 teams with 89 goals from its 22 games this season.

Sockers FC should be favored to emerge from Group C after beating the Michigan Hawks to the Great Lakes Division title, while Group D will get a marquee matchup off the bat. So Cal Blues gave up a national-best four goals during the regular season, and they’ll have to navigate past a group that includes Heartland Division champs Real Colorado and Concorde Fire, who lost just twice this season.

Here's a glance at the four groups in each of the U14 and U18 age divisions for the ECNL Finals in Seattle.