U15 and U14 BNT with plenty of promise 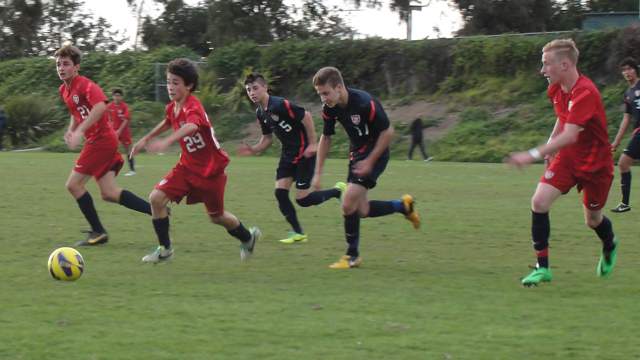 CARSON, Calif. — The U.S. U14 and U15 Boys National Teams are in camp this week at the National Training Center. The two squads held scrimmages against each other on Wednesday to go along with local competition later in the evening. The U15 BNT nabbed the 2-0 win between the two age groups, but the younger squad showed its quality. The U15 BNT could not make it two wins out of two games though, as LA Galaxy U16 topped the national team 3-1 in the late fixture.

Despite the loss, there were plenty of positives to take away from the opening game of the day for the U14 BNT. The younger age group showed its quality and bossed the possession for much of the second half of the game. The younger squad lacked a finishing touch though and the U15s capitalized with goals in each half to nab the win.

Luis Arreola scored the opener off a perfect assist from Raul Aguilera. Aguilera split the two center backs with his pass and Arreola tucked his shot past the keeper for the first goal of the game in the 20th minute.

Much of the first half came down to a battle in the center of the field as both teams looked to pressure in certain areas but did not let many penetrating balls through the gaps to open up the field.

The U14s had the better start of the second half and put the older squad back on its heels with a command of the possession. However, the U15s nearly broke through when substitute Marty Raygoza’s service into the box found Hanif Wright. The LA Galaxy Academy player’s shot went over the target.

Wright did not make the same mistake twice though. The U14 goalkeeper saved Raygoza’s initial shot, but Wright was there for the easy tap-in to double the lead and put a cap on the game.

“There were a lot of good soccer players on the field,” U.S. U15 Boys National Team assistant coach Tony Meola told TopDrawerSoccer.com. “It is nice that the teams are working together to share ideas and help identify players.

“The identification process in our country is difficult because it is so big. I don’t think people understand – I didn’t understand and I’m in the game until I got here – how many people there are out there evaluating kids and really putting their time into it,” Meola added. “That is the only way we are really going to grow this thing.”

Three goals in the final eight minutes undid a wonderful 72 minutes of soccer from the U15 BNT in the second game of the evening at the National Training Center in Carson, Calif.

The U.S., in part, ran out of gas but also suffered a bit against the experience of a well coached Galaxy squad that looks to be the favorite in the Development Academy this season to lift the national championship in July.

Galaxy nearly had the dream start when a sloppy pass from U.S. goalkeeper Carlos Avilez gave the ball right to Ethan Zubak 20 yards from goal. Avilez atoned for his error though with a tremendous stop on Zubak in a dangerous 1v1 situation and left the squads scoreless after only four minutes.

The youth national team quickly settled into the game after the mistake and had the better of the chances in the first half. Winger Nicholas Taitague had a golden chance for the opening goal midway through the half when a deflected shot fell to his feet 10 yards from goal, but his shot was weak and Galaxy goalkeeper Abraham Romero easily snatched it up.

The teams went into half at 0-0 after a very physical final 10 minutes capped the opening stanza. The second half brought much of the same, but the U.S. pushed the pressure higher on the field and looked to bounce on sloppy passes from the Galaxy out of the defense. The strategy worked in the 54th minute when Jonathan Gonzalez snagged an errant pass and slipped Lucas Del Rosario in on goal. Del Rosario finished past Romero for the opener.

The U.S. looked to be on its way to victory, which would be a tremendous feather in the cap for the squad after losing to the squad 8-1 back in August – albeit with a very different lineup at the time.

However, Galaxy had other ideas and three goals in five minutes pushed the local squad to another win over the national team. Rey Ortiz scored the equalizer when he tapped in a rebound with eight minutes left in the game.

Two minutes later, Andrew Perez rifled a shot into the lower corner of the net for the game-winner.

Ortiz made it two on the day three minutes after that when he struck a volley that smashed into the back of the net for the final goal of the day.

“Hugo [Perez] has put together a nice group of players that plays a very specific way,” Meola said about the game. “The model for this group is about developing the players for the future – having kids feel confident on the ball, being able to play in tight spaces. And Hugo is a big proponent about it not being about winning until we go to the tournament. It is about developing players.

“These kids are 14 years old and you can see the future is bright,” Meola continued. “With guys like Tab Ramos and Hugo, you can see what they are trying to give to these kids – things that we didn’t have when we kids and it’s a huge advantage not only for the kids but for the sport in general in our country.”

Both the U15 and U14 BNT return to training on Thursday with games scheduled for Saturday.