Comments
ZAREPHATH , NEW JERSEY - Jim Barlow’s U.S. U15 Boys National Team won a pair of games here Friday as part of their ongoing training camp. The squad, split into three groups for the purpose of scrimmaging, enjoyed victories of 3-0 over FC Westchester’s U16 Academy side, and 1-0 over NJSA 04. 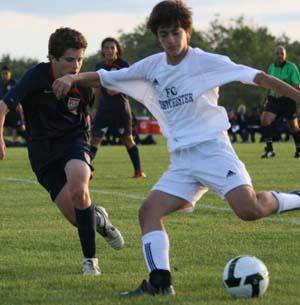 The U15 BNT defeated Westchester FC on Friday.
The team was scheduled to play a match against a group from the U17 MNT here Saturday.

In the win against the Westchester, the match got off to a low-key start and the New York side moved the ball a bit better in the opening half. Still, Jon Villantoy (Met Oval – NY) put the U.S. up 1-0 with his goal.

The U.S. showed more intensity in the 2nd half and scored a couple of nice goals. Marco Carrizales (FC Dallas - Texas) scored one goal and Sebastian Velasquez (Los Alamitos SC - California) had the other for a 3-0 margin of victory.

This was the better game of the evening and was marked by a strong performance in central midfield from the U.S. U15 BNT’s Collin Martin (DC United – Maryland). Martin was very clean on the ball, composed and keeps it moving with aplomb. Jalen Robinson (Bethesda SC – Maryland) and Andrew Change (Sockers – Illinois) were effective in defense.