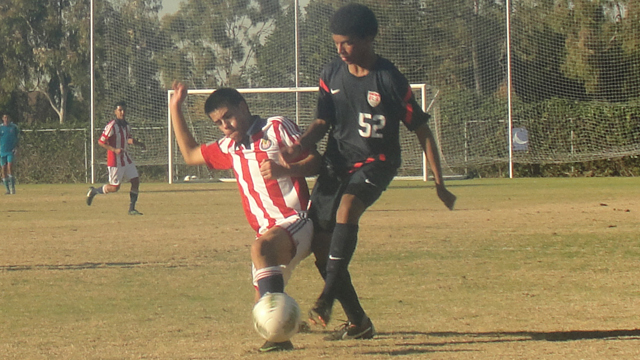 CARSON, Calif. – The U.S. U15 Boys National Team wrapped up its first camp of 2013 on Saturday with a pair of scrimmages against Chivas USA and LA Galaxy’s U16 Development Academy squads.

The results were a bit uneven, but overall the play on the day was a stark improvement from the last camp when San Diego Surf and Chivas USA ran riot against the youth national team.  To the credit of the players at the previous camp, Surf’s physicality and maturity set the tone during that lopsided affair, and that was not the case on Saturday in either game.

The highlights of this camp were the small roster (29 players compared to 36 from previous camps) and the new faces getting a first look with the program.

The opening affair featured what would be perceived as the ‘B’ team from this cycle, but there was plenty of talent on display to suggest some deserved a look with the first team.

Arsenal target Raheem Taylor-Parkes scored the game-winning goal for the youth national team in the dying moments. Taylor-Parkes cut past his mark and drilled a shot to the far corner of the net for the tally.

The goal from the winger highlighted a standout performance from the youngster in his first camp back with the U.S. national team. Taylor-Parkes played with the Canada U17 Men’s National Team last month.

Earlier in the second half, the 14-year-old setup the second goal of the game for the U15 BNT as well. His lethal speed put him on the endline where he cut the ball back across the goal for Kevin Coleman who slotted it into the open net.

Lonestar SC’s McKenzie Gaines scored the opening tally in spectacular fashion. The athletic winger hit a well-placed shot from 25 yards out into the upper corner of the net.

Forward Jorge Ruiz, who scored both of the goals for the Academy, side led Chivas USA in the loss. Ruiz, a youth national team player for the 1997 age group, capitalized on a couple of mistakes by the U.S. in possession with his brace.

Despite the goals conceded, U.S. had a solid performance from the back four against a speedy and talented Chivas USA attack.

LA Galaxy Academy forward Haji Wright said hello to his former teammates on the youth national team before the game, and then he emphatically gave his greetings to the U15 BNT coaching staff during the game with a dominating performance. 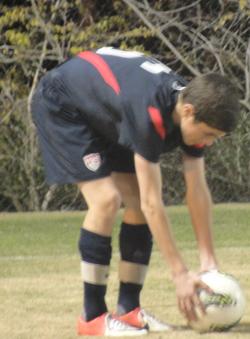 Wright was simply a pawn in the opening tally for the Galaxy though. The MLS youth academy displayed brilliant build-up prior to the opening strike. Right back Alexander Ramos ended up with the final touch, as a perfectly weighted cross from Juan Orozco provided the ideal assist.

Wright, the 6-4 striker, doubled the lead with a burst of pace that was unmatched by the U.S. defense midway through the opening half. Wright raced past the U.S. defense and then around goalkeeper Abraham Romero. The 14-year-old made easy work of the finish into the open net from 18 yards out despite a couple of retreating defenders sliding to stop the shot.

Shortly after Wright’s goal, U.S. got on the board thanks to center back Daniel Barbir. The striker-turned-defender knocked in the first tally for the U.S. following a free kick by Joshua Perez that Hugo Arrellano headed back across the net. The 6-3 center back volleyed the strike home to cut the lead to one goal.

LA Galaxy restored the two-goal lead midway through the second half when Dylan Smith calmly slotted home the fourth goal of the game after a defensive breakdown by the U.S.

Four minutes later, Joe Gallardo answered with a smashing strike from 18 yards out to cut the lead to one again, but the U.S. could not get any closer than that in the final moments.

Starting XI for the U.S. U15 Boys National Team: