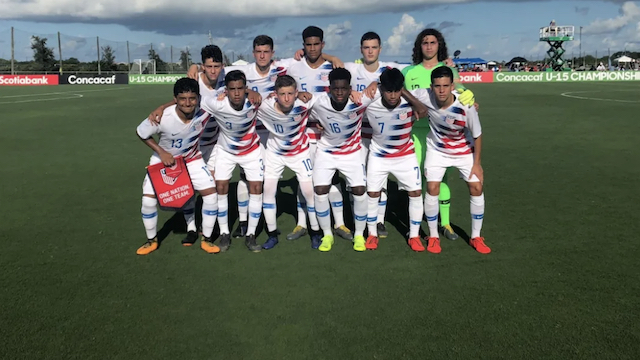 The U.S. U15 Boys National Team won their first two games of the 2019 Concacaf Championship in Florida on Sunday and Monday. USA defeated Haiti 2-0 on Sunday in the first fixture. The host side followed that up with a 3-0 win over Guatemala on Monday.

San Diego Surf midfielder Evan Rotundo has been a standout in the first two games. Rotundo set up the first goal against Haiti with a great pass from the center of the field to send the winger to the end line. He also started the scoring on Monday with an excellent delivery on a set piece that found Jauregui, who hit the post. Valdez scored on the rebound.

Jauregui was another standout for Monday’s game. He had the assist on Cisneros’ goal as well as being involved in Valdez’s goal. He scored the third goal of the day on Monday, which was his second of the tournament. The Sacramento Republic forward is the leading scorer for USA so far at the event.

USA is back in action on Wednesday with the last game from group play against Suriname. The knock-out round begins on August 8 with the final on August 11.