U15 BNT roster announced for Concacaf 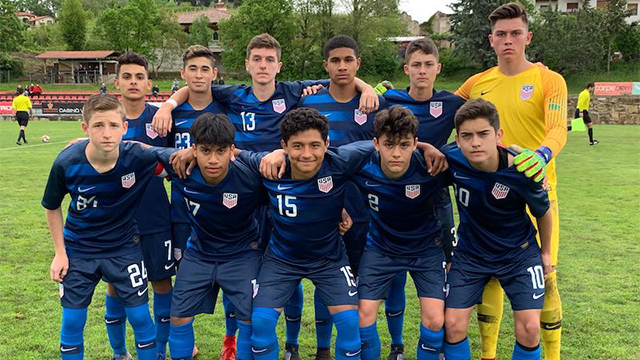 The U.S. Under-15 Boys’ National Team will compete at the 2019 Concacaf U-15 Boys’ Championship at IMG Academy in Bradenton, Fla. from Aug. 4-11. Eighteen players will represent the USA at the tournament, its second participation in the competition.

Steve Klein, Academy Director at U.S. Soccer Development Academy club PA Classics will serve as the U-15 BNT head coach for the tournament. Players born on or after Jan. 1, 2004 are age-eligible for the 2019 Concacaf Boys’ U-15 Championship. The 18-player roster is made up of 17 players born in 2004 and one born in 2005.

Following the group stage, the top two teams from each group will advance to the knockout round. Should the USA advance, it will face a team from Group D in the quarterfinals. All four Division 1 groups are listed below:

Forty-two teams across three divisions will compete at the 2019 Concacaf U-15 Boys’ Championship. Divisions 1 and 2 are composed of four groups of four teams, while Division 3 consists of two groups of five teams. The winner of Division 1’s knockout round bracket will be crowned Concacaf champion. Israel, Portugal and Slovenia will participate in the tournament as invited guest teams from UEFA.

The USA entered the Concacaf Boys’ U-15 Championship for the first time in 2017. At that competition, the U.S. rolled through the group stage and semifinal with four straight victories and a plus-14 goal differential before dropping a hard-fought final to Mexico. Gianluca Busio led the way for the red, white and blue with five goals. Eight of the players at the 2017 tournament went on to represent the USA at the 2019 Concacaf U-17 Championship.

The U-15s’ most recent international action came at the 2019 Torneo delle Nazioni in Gradisca, Italy. There, the team finished ninth, highlighted by a dramatic victory over England that saw the USA equalize in stoppage time and go on to win via penalty kicks.

Goalkeeper Damian Alguera played up with De Anza Force’s U-16/17 squad during the Academy Playoffs, helping the team reach the national semifinals.