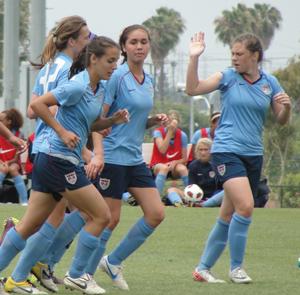 U15 GNT celebrates a goal vs Fram U16

The U15 GNT defeated Fram U16, the 2011 Coast Soccer League Premier Division champions, 4-0 on Saturday thanks to some clever on the fly adjustments by the coach and the players.

While the game started brightly enough for the U.S. with a goal from Mallory Pugh (Real Colorado) in the second minute, the squad struggled to break the extremely high and aggressive pressure of the older opposition until a shift was made in the midfield.

“Obviously, most of the adjustments take place between the days,” Nahas told TopDrawerSoccer.com after the game. “Here, it is just reminders.”

About midway through the first half, Nahas gently reminded center midfielder Ella Stevens (GSA Phoenix) to jump more into the attack and keep her line forward to open passing angles for an outlet.

Stevens aptly took to the role and notched two goals in eight minutes on both sides of the halftime whistle to effectively put the game out of reach early in the second stanza.

“They all have a choice whether they want to make an impact or be just another player on the field,” Nahas said. “We stressed the last few days about the urgency and commitment they have to possess. Ella [Stevens] did that. She was involved in the midfield and scored two goals.”

Stevens’ first goal came in the 40th minute when Mia Gyau (Bethesda Lions) torched her mark with a great move then passed it across the box for Stevens. The midfielder’s first shot was saved but she smashed the rebound into the net.

Gyau was a handful for the Fram outside backs all game. Her great balance and quick change of pace made it nearly impossible for any defender to slow her down on the day.

“Mia [Gyau] was just having fun out there,” Nahas said with a smile. “She has an ability to easily change directions. She has a bright future.”

Stevens notched her second goal three minutes after half when she snuck into the box unmarked and put away a cross from substitute [and hometown favorite] Anika Rodriguez (So Cal Blues).

Seven minutes later, it looked like Stevens would have the hat trick thanks to another cross from Rodriguez, but Fram goalkeeper Carissa Christensen made a quality save to deny the midfielder the honor.

With a three-goal advantage, the U15 GNT settled into the game for a long stretch of the second half and seemed content with the outcome.

However, substitutes Gabriella Carreiro (FC Stars of Massachusetts) and Zoe Redei (Eclipse Select) were not happy with just seeing the minutes out and pushed for a fourth goal late in the contest.

After Redei squandered a couple of chances in front of the net, the striker finally found a way around Christensen in the 86th minute.

Carreiro raced past the right back and sent in an early cross to Redei on a quick attack from the national team. Redei rounded the keeper and slotted the ball into the empty net for the final tally of the outing.

“When you put that national team jersey on, you step onto the field to win every game . . . and scrimmage for that matter,” Nahas said. “Our main objective for this week was to progress and get better leading up to the weekend. For that, it was a success.”