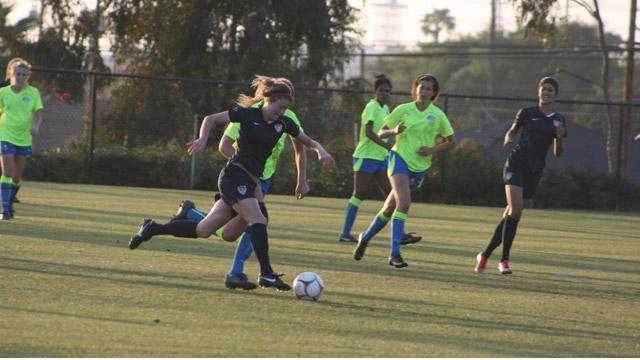 Just like on Wednesday the U15 girls coached by Jill Ellis gave a good showing. Once again, they scored early and maintained a strong work rate before putting the game out of reach with two late goals.

Megan Buckingham
Imani Dorsey of SAC United in Maryland, received a gift from Haley Pounds of Houston-area club Challenge SC for the first goal When Pounds sent an excellent ground-grazing pass, Dorsey simply had to tap the ball into the back of the net, which she did with no mistake to make it 1-0.

The midfield looked very solid again. The trio of Megan Buckingham of Michigan Hawks, Sarah Robinson of MLVA Lightning in California, and Mikaela Harvey of Lonestar SC, were superb in their tackling and passing.

“They play a great brand of soccer,” said Jill Ellis, “They play the ball on the ground and play great front to back.”

Not everything was easy for the Nats. Goalkeeper Penelope Edmonds of New Jersey’s Match Fit Chelsea was tested under the sticks. She had to stretch in order to intercept a tough cross that had danger written all over it. Edmonds was also caught in a one on one matchup when the California squad filtered a pass that split the backs. This required Edmonds to close down the forward and stop the shot, which she did skillfully.

The two center backs, Delany Fechalos of Atlanta Fire, and Chloe Hemingway of West Coast FC, looked slower than their rivals at times when sprinting for the ball, but they never let up and made up for any lack of speed by getting great position on the opponents.

“We need to adjust and fine tune a couple of things,” said Ellis, “But I have to be satisfied with their performance.”

Coach Ellis made nine substitutions in the second half as she continued evaluating the young squad.

Mariah Lee, of Washington Premier, was moved to the attack after starting at left back, similar to this past Wednesday game. She still looked stronger on defense but this time she managed to find a goal after a rebound from the keeper landed at her feet.

One of the subs that looked strong was Reilly Martin, of Indiana’s Carmel United Soccer Club. Playing at the forward position, Martin showed good dribbling skills and created a couple of scoring opportunities including an assist for the second goal.

Coach Ellis seemed very happy with the U15 girls showing throughout the week and is optimistic on the future of this group.

“For the first week of being together, to go out and play like that I can’t be disappointed in anything,” said Ellis.

The U15 girls will set up camp in Carson again in a couple of months and but this time the girls might be playing for a roster spot on the U17 squad, as part of that unit’s 2012 World Cup qualifying cycle

(Read Monday for a report on the U17 WNT scrimmage)