The rain that had been hitting the area let up just in time for match kickoff, and the U.S. team fought hard on a wet, biting cold night for 90 minutes in order to obtain the victory over the team of players a year older. 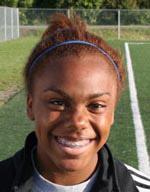 Mariah Lee
For the first 30 minutes the U15 girls and the California team traded attacks. Many of those U.S. attacks were started by Lonestar SC’s Mikaela Harvey.

“She’s strong, tough, fearless,” said Jill Ellis, Head Coach of the team, “She’s got a big engine and covers a lot of ground.”

Despite only playing 25 minutes, Michigan Hawks player Rilka Noel made the best out of it and dished out an assist for the second goal and crossed a beautiful shot into the net out of the outstretched goalkeepers reach.

Coach Ellis gave playing time to most of her players. She subbed players in and out and switched the players’ positions as well.

Mariah Lee of Washington Premier started the game at right back and attacked up the right flank with great dribbling and good passes. For the last 30 minutes of the game she was moved to play forward, but she wasn’t as successful on top as she was on defense due to the defenders closing her space quicker and not allowing her to have the room needed for her dribbling.

“She also plays in the front,” said Ellis, who also coaches the U17 WNT. “We want to give them an opportunity to showcase themselves, but I thought she did very well in the back, we were very pleased with her coming forward.”

They each held their ground and showed concentration when they managed to make tough saves despite a wet field caused by the pre-game storm.

Puddles of water did not hinder the Flores twins from impressing. Monica and Sabrina Flores of SDFC in New Jersey overcame dead spots on their side of the field and managed to defend and attack well all night; they hustled for every ball and didn’t shy away from any tackle.

“They were both good today,” said Ellis, “They’re special. They’re [going] to grow and be something special.”

The learning curve gets sharper as the team will next face the Cal-South ’94 Girls’ ODP on Saturday.