U15 GNT roster for Concacaf Championship 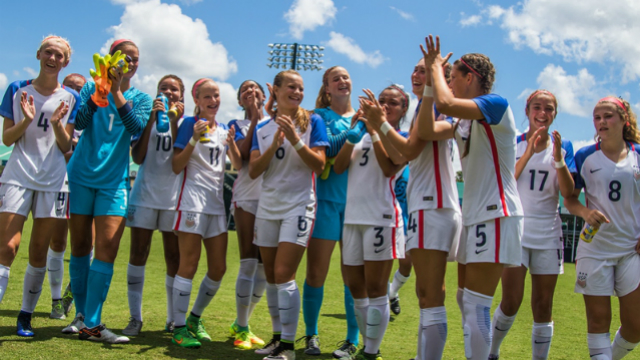 The 18 players who will represent the USA at the 2018 Concacaf Girls’ Under-15 Championship have been named. April Kater will coach the USA at the third Concacaf tournament for this age group being held from August 6-13 at IMG Academy in Bradenton, Fla.

With 28 nations competing in two divisions, this will be the largest Concacaf tournament ever for female participants and will feature a record number of Concacaf Member Associations as well as two invited teams from UEFA.

The USA will play in Group A in the 12-team Division 1 and open its tournament on Aug. 7 against Jamaica on Field 1. The young Americans will then face guest team Portugal on Aug. 8 on Field 2 and El Salvador on Aug. 10 on Field 1. All the USA’s games are at 9 a.m. ET. Concacaf has confirmed the matches will be streamed with details to be confirmed shortly.

The tournament format dictates that the three countries who finish in first-place in the Division I groups will advance to the semifinals on Aug. 11 along with the best second-place finisher. The championship game will be on Aug. 13.

If teams are tied on points, the first tie-breaker in the group is goal difference and then goals scored.

There are four groups of four in Division 2 and those group winners will also advance to the semifinals for their division, but there will also be placement games in both Divisions for the teams that do not qualify for the semifinals.

This will mark the third time this Concacaf competition has been held for U-15 girls. The USA did not participate in the first tournament in 2014 but won the competition in 2016 in Orlando with many of the players currently with the U-17 Women’s National Team that will play in the 2018 FIFA U-17 Women’s World Cup. The USA took all seven games at that tournament by shutout while compiling a 49-0 goal difference. The USA defeated Costa Rica 5-0 in the semifinal and Canada 2-0 in the championship game to take the regional title.