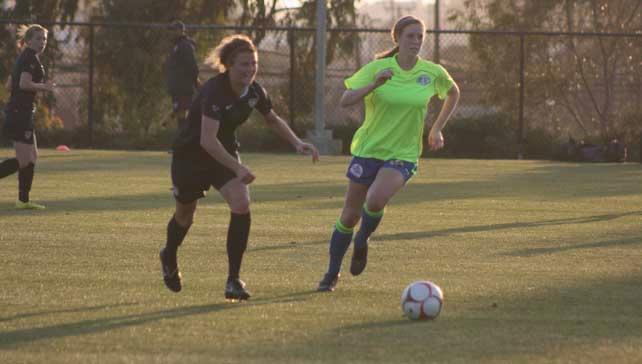 U15 Girls National Team coach Mike Dickey says his teams showed a lot of good traits during its recent training camp at the Olympic Training Center in Chula Vista, California.

But a final camp match against a talented San Diego Surf U16 team showed some vulnerabilities as well. The 3-3 draw vs. the club team (which includes national standouts like Kate Perry, Allie Bailey and Maya Theuer) gave Dickey a good idea of what the group needs to work on as it begins the cycle toward the FIFA U17 World Cup in 2012.

“We had more success in the other games (7-0 vs. Philippines U19 WNT and 6-0 vs. San Diego Sea Lions (WPSL),” Dickey said. “But in the final game we had a few issues, particularly with turnovers.” 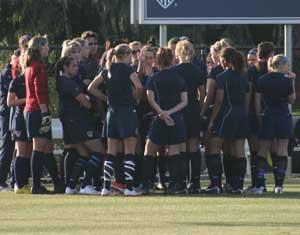 “Joanna got a good grip on that position during the week,” Dickey said of the North Carolinian. “It’s not her normal tendency to go forward and make plays, but she is a good attacking player and I want her to have more of a presence in the offense and scoring goals.

“Morgan Andrews really played well as a center back,” he continued. “Mandy (Amanda Freeman) had to leave camp early because of a death in the family. So Morgan had to fall into that role. It’s not what she is used to doing, but she played well at center back.”

Cleveland FC’s Allison Stuckey (defensive midfielder) and Neusport FC’s (Las Vegas) Lauren Kaskie (midfield and left back) were also singled out for good play by Dickey, who is confident his team can play well in either a 4-3-3 or a 4-4-2.

“I’m optimistic about this group as they move to the U17 level,” he said. “Some of these kids will be getting call ups to U17 camps this year. We’ll probably bring one with us to Denmark. Certainly a number of them made us think more about their development. They are maturing and playing great soccer.”

U15 GNT Roster (Courtesy US Soccer)