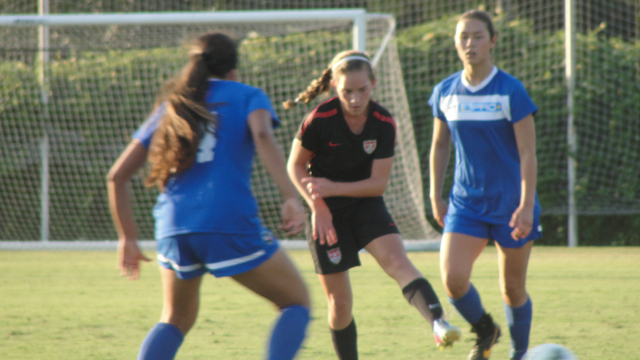 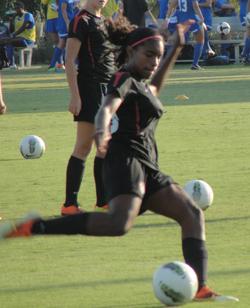 The sides settled on a scoreless draw, as neither squad could break through during the three 30-minute periods.

Both teams lined up in a 4-3-3 formation and focused on winning the game in the midfield. During the first period, neither team seized control of the game and the midfield battle left both goalies with little to do – the U.S. registered the lone shot on goal of the period.

“We have a good group of young players here,” U15 GNT head coach Damon Nahas told TopDrawerSoccer.com. “We have a lot of 1999s here with the 1998s. We’ve addressed this as an objective to build on what we have done this week [in training]. When we get out in a game, their heads turn off for a bit. The second 30 minutes were a lot more quality from some of them. We’ve addressed a lot of different situations where we will look at film and build on. I wouldn’t say negatives – but definitely areas that we want to address.”

The U.S. had one golden chance to take the lead when left winger Belle Briede rounded the outside back of Cal South and had an open channel to net. The Tophat SC player decided to lay off her opportunity to a teammate with a better angle, but the pass was cut off and cleared from danger by Ally Prisock.

The second period saw the U.S. gain an advantage in possession, as the defense and midfield kept hold of the ball and tried to make Cal South chase. The advantage in possession did not result in many more chances in front of the net. Chloe Frisch’s shot from the right side of the box represented the best chance of the period for the U.S. Cal South goalkeeper Christie Carey blocked the initial attempt and jumped on the rebound before anyone else could put a foot on it.

The game opened up in the final period with the teams combining for 10 shots with five on goal.

Cal South’s Chloe Castaneda was the main threat for the older side. The attacking midfielder was a handful with the ball on her feet and nearly broke through the U.S. defense on a couple of occasions. Castaneda’s shot could not find the target though.

The U.S. did manage four shots on goal, but the most open look at a game-winner did not come until the final minute when young Samantha Tran flew in behind the Cal South defense. Like Briede in the first period, Tran elected to pass the ball instead of going straight at goal and Cal South recovered to clear the danger.

“For a handful of them, it is a new camp,” Nahas said about preparations on playing style and formation before the game. “For the majority of them, they’ve already been in but it’s adjusting to camp. The first part of it is some testing. We address more what we want to do in our shape, but more so in just keeping the ball. Not necessarily, that we are looking to go forward, but I want every player on the field to want the ball.”

The U.S. U15 GNT caps camp on Friday with another scrimmage on Friday against Cal South. The youth national team is scheduled to face the 1996 group in that meeting.

A roster with the numbers of U.S. players was not available at time of publication.