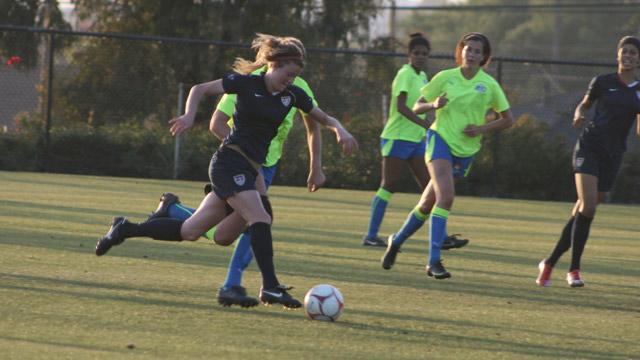 The squad of mostly '95s who are in their final camp of the cycle as U15s, plus a few 96s, looked good going forward, in midfield and in the back on the day. Dickey told us afterward he was pleased with the opening performance.

A message was sent early as Bethesda SC’s Andi Sullivan hit the bar with a shot. Sullivan, CASL’s Joanna Boyles and Colorado Rush’s Gabrielle Miranda were controlling the middle of the field for the U.S. The possession led to an opening goal and again Sullivan hit a shot off the bar, but this time So Cal Blues forward Amber Munerlyn was on hand to knock home the rebound for a 1-0 lead.

The U15s doubled their lead a bit later when Munerlyn played a good through ball for an onrushing Summer Green of Michigan Hawks. Green deftly rounded the keeper and finished from a sharp angle to make it 2-0, which was the halftime score.

Region I showed some signs of life after both teams made some halftime substitutions (the substitution rules here are no re-entry). Nordic SC’s Lauren Bernard hit a good cross from the right and Scorpions’ Lauren Berman provided the finish to cut the margin to 2-1. Erica Walsh’s Easterners were getting more of the ball and getting forward more.

Dickey then switched from 4-3-3- to 4-4-2 and this seemed to right the ship. Stars of Mass winger Lydia Simmons served a ball in from the left that resulted in a scramble in front of goal, and Columbia Timbers’ forward Elizabeth Boon knocked the ball in to make it 3-1.

The final goal came when Neusport FC’s Lauren Kaskie played a good through ball for the very active Boon. Her shot was saved at point-blank range by Region I goalkeeper Caroline Casey, but Betsy Brandon of the Colorado Rush chased the ball down and executed a wonderful chip into the back of the net from about 40 yards for the final 4-1 scoreline.

Casey, who plays club soccer at Virginia Rush, turned in a number of good saves in the game or else the score would have been lopsided.

Region I had their share of counter-attacking opportunities but U15 central defender Miranda Freeman, who plays her club soccer for nearby Renegades, was excellent in reading attempted through balls, stepping to a number of dangerous situations and defusing the threat for her team. Freeman is cool on the ball in her passing from the back as well, which she attributed to a number of factors.

Next up for the U.S. is a team from Norway here on Tuesday. Region I will play Region IV, also on Tuesday.

A spirited game brought afternoon play to a close. Slammers’s standout Makenzy Doniak and Hurricane FC’s Krissi Killion gave a sneak preview of what might be NCAA battles to come as each were in good form, running with the ball, hitting some sparkling shots and putting the ball in the back of the net. Killion, who will play college soccer at Oklahoma State, tied the game with a brilliant individual effort and showed great energy and fight for the entire match despite warm temperatures which seemed to sap some players of their energy. I like her better as an attacking midfielder, but her explosiveness certainly suits her as a forward too.

Same thing with Doniak. Not sure where she’ll be playing her college soccer but whoever it is will be lucky to have her. She too was very good running with the ball, made some killer passes and especially knows where the goal is, which she showed with a 30-yard laser beam for the opening goal.

The winning goal came when Elk Grove United’s Devlyn Jeter got behind the defense and finished 1v1 for a final 2-1 victory for Region IV.

Other standouts for the match included Region III and Brentwood SC Premier defender Malinda Allen, who was excellent in the air, Sting midfielder Jana Jeffrey, who won a good share of balls and played effectively simple passes. Region IV goalkeeper Andi Tostanoski, of Pride Predators in Colorado, made a couple of big saves including one on Anna McClung near the end of the match to preserve the win. Similarly, Hurricane FC goalkeeper Kaela Little showed very good reflexes between the sticks for Region III in the 2nd half, three times leaving her feet to push away hard shots and keep her team in the contest.

We will be back in Boca Raton on Monday to cover matches in the 1995 age group.