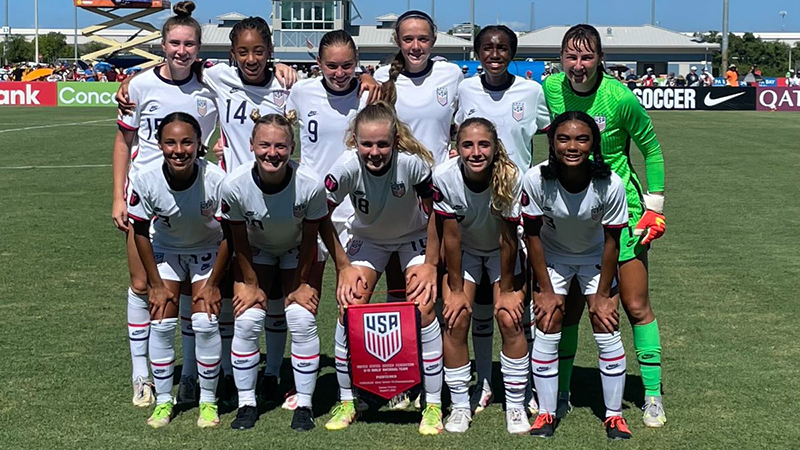 Kimmi Ascanio’s first-half hat trick paved the way for the U.S. U15 GNT’s 12-0 win against Puerto Rico to open the Concacaf Championship on Monday.

After the U17 and U20 dominated their respective regional championship earlier this year, Ascanio made it a flying start for the U15 squad. Three goals in the first 15 minutes set the tone from the Americans’ rampant attack. Kennedy Fuller scored four times and Alexandra Pfeiffer also had a hat trick in the comfortable win.

Ascanio bagged her first five minutes into the game. A long diagonal was controlled by Ava Harrison into the penalty area. After holding off a Puerto Rico defender, Harrison slid the ball into Ascanio’s path. The midfielder, in enough space inside the penalty area, blasted home the first goal to the near post.

The midfielder scored again in the 10th minute. An extremely quick combination play featuring Carrie Helfrich and Kennedy Fuller got Ascanio into space inside the six-yard box. The youngest player on the team had her second, spinning to lash home and make it a 2-0 game.

It was a simple ball clipped over the top that unlocked the Puerto Rico back line and helped Ascanio seal her hat trick.  The midfielder showed nice close control to corral the pass, slotting her third of the game under the goalkeeper.

Fuller made it 4-0 in the 26th minute. Alexandra Pfeiffer, deployed on the right flank, picked out the midfielder wide open in the penalty box. A solid first touch setup a finish at the far post.

Pfeiffer went from provider to finisher for the fift. Fuller was the provider this time, as she picked up the ball and slid it across to Pfeiffer for a tap-in to make it 5-0. Less than a minute later, Fuller chipped in a sixth, hitting a beautiful, left-footed shot over the GK.

Into first-half stoppage time, Pfeiffer smashed home a seventh. Harrison forced a very good save from Puerto Rico goalkeeper, but the SLSG Navy standout was first to the rebound to put the U.S. up 7-0 at the break.

After making a pair of halftime subs, the U.S. picked up where it left off. Fuller had a hat trick three minutes into the second half; substitute Abby Ballek scored in the 46th minute to make it 9-0. Another substitute, Ashlyn Puerta, tapped home the team’s tenth of the game. One of a few players to go the full game (70 minutes) Fuller scored her fourth in the 55th minute.

With two minutes left in the game, Pfeiffer became the third player to finish the game with a hat trick, smashing home the final goal of the game off the underside of the bar.

A second group game is set for Tuesday, August 2 against Jamaica as the Concacaf Championship continues.