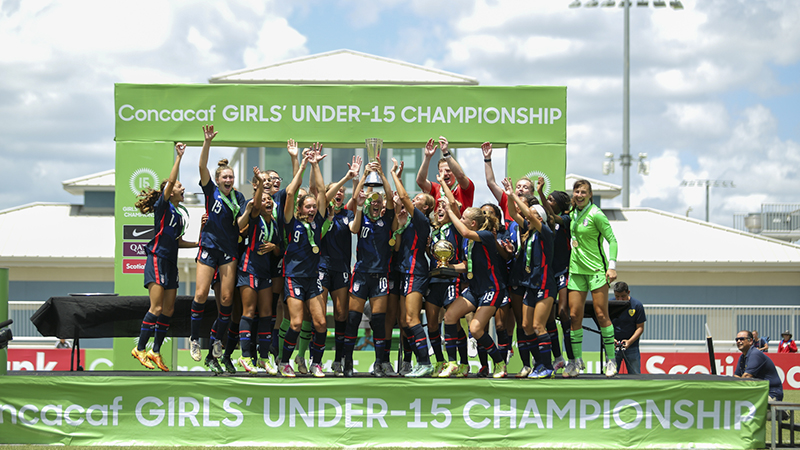 Carrie Helfrich had an easy pass available. 10 yards, to her right, a wide open teammate.

She opted for the hard one, a floated the ball over an opposing defender, a spinning thing to set up an opportunity. And she pulled it off, the ball bouncing obediently for her teammate Alexandra Pfeiffer. A lashed shot later, the ball was in the back of the net, and the U.S. U15 GNT was celebrating a crucial opening goal against Canada in the Concacaf Championship.

The assist was one of several impressive attacking moments in the U.S. win.

Kennedy Fuller put in another bright shift alongside Helfrich and Pfeiffer, as the attacking midfielder scored one and assisted one, playing a crucial role as the US bagged the Concacaf Championship for the second straight time. Fuller won the Best Player Award at the tournament, as the Solar star scored nine times in the competition.

But it wasn’t a comfortable win. Here was a relieved US team. One pushed and tested by a resilient opponent. The defensive contingent — a group used to cruising through contests — was called on with regularity. It was spread out, pushed around, forced into tackles and dragged around. Still, concrete danger, serious chances, seldom materialized. Meanwhile, the US was effective in the final third, breaking down a stout Canada defense thanks to goals from Fuller, Pfeiffer, Abby Ballek and Ashlyn Puerta.

And in a testy contest, the US turned to its captain for offense. Fuller was given freedom to attack in the No. 10 position. She took advantage of the space, pressing defensively while establishing herself as the most expressive option on the ball.

Fuller orchestrated early on. She was crucial in the build up to the opener, finding Helfrich in space, who clipped the ball to Pfeiffer in behind the Canada back line. The forward showed little hesitation, dutifully whacking the ball past Noelle Henning into the back of the net.

The captain added a second two minutes later. Helfrich surged down the left, beating two defenders and crossing into the penalty area. Her whipped ball found a stray Canadian arm, and the referee pointed to the spot. Fuller calmly deposited the penalty kick into the bottom left corner for a 2-0 lead.

Still, it was a half with some Canadian fight. It battled for every ball and looked to hit on the break. And it was rewarded with some promising moments. Annabelle Chukwu hassled down the left, while striker Isabelle Chukwu caused problems through the middle. Isabelle Chukwu was rewarded, audaciously chipping the keeper from 20 yards out to make the score 2-1 after 26 minutes.

There were further moments from Canada, and more control in central areas, too. There were runs in the channels, quick interchanges through the midfield, but the killer ball never quite came. The US always seemed to have a timely challenge or nifty interception. And save for a few testy moments, the US retained its 2-1 lead at the half.

There were a few chances immediately after the break. Henning made some tidy saves, twice diverting close range attempts from Fuller. Meanwhile, the US defensive unit continued its solidity, limiting Canada to just three shots in the period.

And from that solid base, the insurance goal came. King broke up play in the middle of the pitch before finding Fuller. A series of neat passes sent Ballel through on goal. And she opted for finesse, threading the goal through Henning’s legs to send her team into raptures.

The fourth came minutes later, the result of a neat cutback and flick from close range, with Puerta applying the finishing touch.

There was little control about the American celebrations. This group’s first Concacaf championship was met with jubilation, screams of delight, a joyous reaction that continued right through the trophy lift. And for this team — one that saw off a resilient opponent — there could be many more accolades to come.