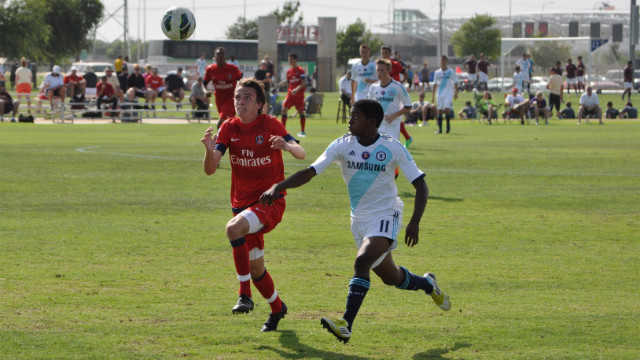 FRISCO, Texas — Nerves can sometimes play a part on the first day of action on the national stage, but for many clubs at the U16 Development Academy Playoffs, that simply wasn't the case. Several clubs were able to get their week off to an ideal start, as a handful of opening matches featured lopsided results.

Playing in front of a favorable crowd, Solar Chelsea jumped all over Chicago Magic PSG and didn't look back. 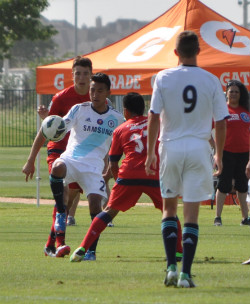 U17 MNT forward Alan Winn was the catalyst, scoring twice in the first half and chipping in an assist in the 5-1 victory.

"The first 20 minutes were the key," head coach Kevin Smith said. "We knew they’d be excited, but they came out and were absolutely flying."

Caleb Smith helped engineer the perfect start, as his beautifully lofted free kick spun like a magnent off of Winn's head and into the back of the net within the game's first five minutes. Winn then did his part, doubling the lead no less than five minutes later.

All over the field Solar was active, closing down Chicago Magic attacker Elijah Rice and limiting service to Andrija Novakovich throughout most of the match.

The frenetic start for Solar slowed a bit, but the team added three more after the break, as Bryson Asher and Toryima Asom both notched tallies. Novakovich provided the consolation goal for the Magic in the second half, fighting off a pair of defenders and showing his quality with a well-taken finish.

For Smith it was all about the team's start to the game, not to mention Winn's shift on the day.

Entering Tuesday's match, the obvious focal point for FC Bolts Celtic was leading scorer Harrison Swartz. But it was his attacking counterpart Mohamed Kenawy who was the star of the day, as his hat trick helped the Massachusetts squad overpower a D.C. United side that struggled to cope with FC Bolts energetic attack.

Through the early stretch of the match, it looked like United would find more joy in front of goal through the offensive duo of Gerson Umana and Graydon Hester, but Kenawy ensured that wouldn't happen, helping provide a comfortable margin ahead of the MLS club.

De Anza Force came up trumps with a steady attacking display that got them off to a quick start in their group.

Captain Brandon Gillingham, a 2015 Stanford commit, sat deep in the midfield and continually broke up Arsenal's attacks. Arsenal once had a dangerous opportunity in the first half when Ethan Zubak got clear for a breakaway he flubbed. Other than that, before Gillingham and most of the starters came out at halftime, he was a rock.

"Everybody played, we were able to rest some guys and now we're able to focus on the next game," Force coach Shaun Tsakaris said.

About 10 minutes after Powell's opener, dangerous forward Carlos Delgadillo drew a penalty, and Aravind Sivakumar finished calmly to double the lead. Delgadillo added a goal of his own about 10 minutes into the second half for a 3-0 lead. Arsenal pulled one back close to the end of the game when Yehudi Marin got his head to a deep free kick.

Four different Red Bulls found the back of the net, as the MLS side overwhelmed a tough and rugged PA Classics squad over the course of the 80 minutes.

Anthony Viteri's early goal set the tone for the match, and while Classics managed to keep it close for long stretches, almost getting back in the game through dangerous attacking thrusts led by Christian Pulisic and Justin Torres that nearly breached the Red Bulls goal. Alexander Tejera added to the lead prior to the half with a timely finish that increased New York's lead.

While PA came out in threatening form after the break, goals from Kevin Politz and Nathaniel Odusote put the result out of reach. It could have been an even wider margin as well, but second half sub Malcolm Dixon had his penalty kick saved by Jake McAteer late in the second stanza.

In the other Group 7 match of the day, Houston Dynamo defeated Concorde Fire 3-1.

MF Mohamed Kenawy, FC Bolts Celtic: A swashbuckling attacking performance from FC Bolts Celtic was punctuated by lethal finishing from Kenawy, who helped lead his side to a well-deserved victory over a tough D.C. United side.

F Alan Winn, Solar Chelsea SC: An attacker with good pace and a nose for goal, Winn was one of many players in a Solar Chelsea jersey who excelled on the day. His two finishes helped set the tone for a dominant win against a talented Chicago Magic PSG side.

F Santiago Agudelo, FC Dallas: Playing on his home turf, the high-scoring forward bagged a brace to lead his side over Sockers FC and was a handful throughout the match.

F Carlos Delgadillo, De Anza Force: Delgadillo had a huge opening game at the Academy Playoffs, drawing a penalty and converting a well-taken goal on a rebound in the second half. He's composed up top, has size and can gallop past defenders. He'll be a tough out for opposing back lines all week.