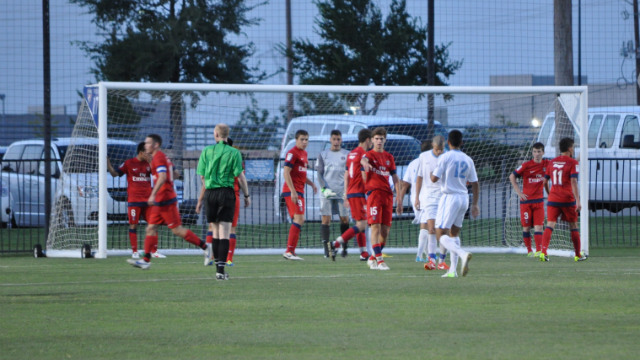 FRISCO, Texas – The time for one last push begins now.

After a long and challenging Academy slate, the 32 U18 Dev. Academy squads began their playoff effort on Monday in North Texas.

With scouts, fans and coaches all watching on, see which teams enjoyed a bright start to their weeklong stay in the Dallas area:

Two goals from Jeffrey Rhodes secured a hard-fought victory for Indiana Fire, in an entertaining 2-0 win over Chivas USA.

In a matchup that saw Chivas striker Caleb Calvert exit the game early with an injury, U.S. youth international Cameron Lindley bossed the midfield, helping setup both of Rhodes goals and getting the week in Texas off to a perfect start for the Indiana outfit.

“The main goal was to make sure that we walked out of the first game in the group with a point so the main concern was our defensive habits,” Indiana Fire head coach Phil Presser told TopDrawerSoccer.com. “We came out and I thought we kept the ball pretty well early on until we capitalized.”

Indiana’s strong start to the match was punctuated by Rhodes first tally. A lofted cross from Lindley into the box found the unmarked midfield, who volleyed past the ‘keeper to the far post.

The goal spurred Chivas USA on, but the MLS Academy side lost Calvert to an injury midway through the first half. That didn’t deter the Goats, however, and they nearly tied the game from a set piece right before the break. Left back Brian Kennedy provided significant offensive thrust down his flank, troubling Indiana’s defense on several occasions.

Set pieces looked the more likely avenue for Chivas to pull level, and they nearly did after the break, hitting the crossbar from another dangerous delivery.

Presser was pleased with how his team managed to keep its cool in the face of some tenacious pressure for Chivas.

“I think when you look at it, they didn’t rush themselves, they didn’t panic,” he said. “They showed a lot of maturity in not panicking, seven of the starting lineup were true U16s, they’re just maturing at a quicker rate, it’s nice to see.”

On the other end, Lindley continued to pull the strings in the midfield, spraying passes all over the field. He worked a nice one-two combination down the right flank and provided an open look for Gregory Riedford, whose shot was blocked for a corner.

With just minutes to go, Lindley and Riedford set the table for Rhodes to secure victory, putting in a teasing cross in front of the goal mouth that Riedford tapped back to Rhodes who hammered home.

Thanks to the win, Indiana Fire sits atop Group 7, tied on points with De Anza Force, which won 2-0 against Baltimore

The Whitecaps lashed in an academy-best 87 goals during the regular season, stamping their reputation as one of the most attractive, free-flowing teams in the academy system. They upheld their reputation Monday by sprinting past the Fire to go to the top of Group 1 with a stirling attacking performance.

The 'Caps pinned back the Fire from the start, buoyed at the back by the stabilizing play of captain center back Jackson Farmer. Vancouver had several near-misses until midfielder Kianz Froese cleaned up a loose ball and rifled it past the keeper from 15 yards for a 1-0 lead about 20 minutes into the game.

About 15 minutes later, Marco Bustos, who paired with Froese in center midfield, doubled the lead. A shanked clearance fell to Bustos' feet just outside the penalty area, and the Fire didn't close him down. That allowed Bustos to load the ball onto his left foot and curl a ball into the upper left corner. Both Bustos and Froese are U16 players playing up with the U18 team, and both made an immediate impact.

"The pleasing thing for me in this game is that we had to show that commitment and passion," Whitecaps coach Gordon Forrest said. "(The Fire) had a few good spells in the game, so it was good to see the guys rolling up their sleeves and battling away."

While the Whitecaps continued to pour forward, the Fire struggled to string together enough passes to threaten keeper Sean Melvin. The 'Caps finally added the capper when Brody Huitema, who had 26 goals during the regular season, nodded home an uncontested header in the last 10 minutes to set the final score.

The Whitecaps sit in first place in Group 1, tied on three points with PA Classics, which beat Houston Dynamo 2-0.

Ahead of MLS' California Clasico on Saturday, the clubs' U18 teams squared off to open Group 6, and the Galaxy ran all over their rivals to the north. Forward Justin Dhillon recorded a hat trick and the Galaxy eased to the top of the table.

The Galaxy's uber-talented midfield trio of Raul Mendiola, William Raygoza and Brian Iloski sliced through the Earthquakes' back line without issue. It was only about 10 minutes into the game when their dearth of possession and fluid movement forward paid the ultimate dividend. Mendiola freed left back Juan Reyna to streak down the left and serve in a pinpoint cross for Dhillon's first. Dhillon went to ground and poked in the goal to put the Galaxy ahead for good.

Dhillon added his second about 10 minutes before half on another sublime feed, this one off the foot of Iloski. He skittered through a hole on the right and served up a ball that fell perfectly to Dhillon about eight yards out. His first attempt dinged off the post, but he cleaned up his miss for his second. He got his third just after half to put the Galaxy up 3-0.

The Earthquakes pulled one back later in the second half, but the Galaxy polished off the breezy win with a final goal from Sebastian Velasquez.

LA's win vaulted them into first place in Group 6, ahead of the New England Revolution and Dallas Texans, which tied 1-1.

A strong outing from Chicago Magic goalkeeper Andrew Putna helped a first half goal from Christian Henock stand up as the difference, as the Magic edged Florida side Weston FC in a tight affair.

“It could of gone either way,” Magic head coach Louis Mateus told TopDrawerSoccer.com. “They could have scored a goal, they deserved to probably to score in the second half, but unfortunately that’s part of the game.”

Midway through the first half, Henock found himself unmarked at the far post, and when a cross slipped through the Weston FC defense, to his feet, he lashed home far post to put his side out in front.

But after opening the scoring, Weston seized the momentum for long stretches of the match, and prolific scorer Nicholas Pappacena came close on numerous occasions to tying the game, hitting the crossbar and finding Putna in his way on every other time.

On more than one occasion, desperate defending and alert saves from Putna kept Weston off the score sheet, as the attack led by Pappacena and Ismael Longo couldn’t find the back of the net.

The Magic jumped to the top of Group 4, as the Red Bulls could only muster a 2-2 draw with Strikers FC.

MF Cameron Lindley, Indiana Fire: A composed performance from the central midfielder hightlighted an outstanding body of work from his Indiana side.

F Justin Dhillon, LA Galaxy: Dhillon was a known quantity during the regular season, putting in 17 goals and leading the Galaxy to a first-place finish in their division. Even with the increased scrutiny, the big, strapping striker knocked in three goals against the 'Quakes on Monday to get the Galaxy off to a flyer at the Development Academy Playoffs. Dhillon has rare speed for a player his size, and he'll continue to be a handful on a team with so many silky midfielders.

F Steve Eneme, Shattuck St. Mary's: Shattuck St. Mary's has an enormous amount of size, and that includes Eneme, their capable No. 9. St. Mary's breezed past Pateadores 4-0 on Monday in their opener in Group 5, and Eneme provided the second of St. Mary's goals. The striker found space about 30 yards out and galloped in for a cool opposite-post finish.

D Jackson Farmer, Vancouver Whitecaps: The 'Caps' offense gets most of the attention, but Farmer's rock-solid play from his post at center back is just as crucial to Vancouver's soaring success. The captain helped the 'Caps keep a clean sheet Monday in a 3-0 win over the Chicago Fire, and his forceful play was a big reason why.

GK Andrew Putna, Chicago Magic PSG: Made several sharp stops to keep a clean sheet and pick up three points against a dangerous Weston FC. He didn't make any highlight-reel saves, but was in the right place in the right time and kept his defense organized as well.