Alex Monis scored the lone goal of the game in the second half. Dante Sealy dribbled through a pair of defenders before linking up with Monis who one-timed the finish past the Galaxy goalkeeper for the game-winning strike.

It was an exciting game from the opening whistle. The U.S. squad had some good sequences, which was impressive for a group at the early stage of the camp. With crisp passing and a full-throttle approach in the attack, USA had chances in the opening half, but Galaxy goalkeeper Carlos Zuniga had a terrific game and made a number of great saves.

Philadelphia Union forward Patrick Bohui had most of the chances for the USA squad in the game. Bohui, an attacker with pace and strength, lined up on left wing in the first half. He didn’t see much of the ball in the first 10 minutes as he got a feel for his teammates and how he was being defending but once he grew into the game, his influence was undeniable. He had three good shots on goal in the first half, but Zuniga denied him each time. Bohui nearly netted the opener on a rebound from a shot from Sealy, but he was offside on the play.

USA took the lead off of Monis’ terrific finish minutes later. Sealy kept the attack in high gear following the goal and nearly doubled the lead off a pass from Anton Sorenson, but his effort was denied by a sliding save from Galaxy goalkeeper Anthony Rodriguez.

Bohui kept finding success on the wing with his pace against the Galaxy outside backs, but his final chance was denied by a clumsy challenge. The mistimed tackled seemed to slow down Bohui for the rest of the game.

LA Galaxy had one final chance for an equalizer in the final minute of the game after a blunder from the USA group on a free kick. U.S. attempted to go quickly on a free kick, but the initial pass was played into pressure and the receiver put his hand on the ball to retake the kick. The referee awarded a free kick to LA Galaxy. The home team immediately found an open man between the two USA center backs, but the pass was a few inches away from the recipients feet and USA escaped with a shutout and a win.

It was a revenge game for Club Tijuana. The Mexican club lost to the Youth National Team last year during the camp in Chula Vista. On Tuesday, Club Tijuana scored twice in the first half and held on for a 2-1 victory.

The opening goal of the game was the best of the day. An overhead kick from inside the 18-yard box put Club Tijuana up 1-0.

Dantouma Toure answered for USA with another terrific goal, as he has a reputation for scoring against all competition. Toure’s strike was only good for a few minutes before Xolos regained the lead.

U.S., attempting to play out of the back, gave away the ball in the center of the field from a pass between the goalkeeper and the midfield line. Xolos quickly struck with the USA defense out of position.

Toure had another look to put the teams on level terms, but the Xolos goalkeeper thwarted his effort with a charging, sliding save. Jack McGlynn had the final chance of the first half on a looping shot from about 18 yards out, but his shot hit off the top of the crossbar.

USA failed to garner much traction in the in the second half, and came up one goal short in the clash. 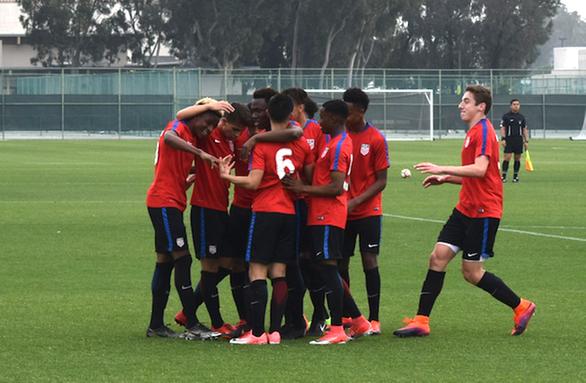