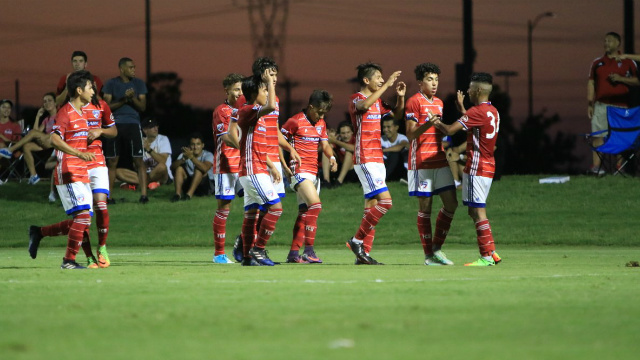 The Final Four is now set.

After Thursday's quarterfinals in the U16 Development Academy playoffs, a quartet of four teams is heading to Carson, Calif. next week for the national semifinals.

Here's how each game played out on Thursday.

Three goals in the first half proppelled Atlanta United to the semifinals, as a fine debut season in the Development Academy continued.

It was Dylan Gaither's effort in the 18th minute that cracked open the scoring, and it was complimented by late tallies by Carleton and James Brighton to push the lead to 3-0 at the break.

Carleton and Jones combined for the second goal, and the two combined in the 67th minute for the fourth goal, as Jones tapped in a low cross from Carleton.

Zyen set Andrew up for one earlier, and now Andrew returns the favor

Jumping out to a perfect start on the road, Real Salt Lake grabbed an early goal and didn't look back at Children's Mercy Park.

Even though Sporting KC kept U16 leading scorer Sebastian Soto quiet, three players for RSL stepped up to drive the offense.

Juan Obeso lashed home the game's opening goal in the sixth minute, and it was 2-0 before halftime after Benjamin Ortiz added to RSL's lead.

RSL extended its lead to 3-0 through a 58th minute tally from Julian Vazquez, all but clinching his team's spot in the semifinals.

Able to deploy a full pro up front, defending U16 champs FC Dallas ran away as 5-0 winners against the Colorado Rapids.

The scoreline was much closer until the game's final seven minutes. Ferreira had a brace with goals in the 13th and 46th minute, giving the hosts a 2-0 lead.

Jalen James cued up a barrage of three late goals, as he scored in the 73rd minute, followed by Ferreira's third three minutes after that. Alex Bautista rounded out the scoring to take FC Dallas on to Carson.

A two-goal burst from the Vancouver Whitecaps and a penalty save in the second half secured progress for the host side up in British Columbia.

After 26 minutes of scoreless soccer between the Cascadia rivals, Alessandro Hojabrpour's effort put Vancouver out in front against the Sounders.

Jose Hernandez and Jefferson Alade cushioned the lead to 3-0 shortly after the break, scoring in the 44th and 49th minute respectively.

Seattle had a chance to cut into the lead in the 66th minute when they earned a penalty, but Vancouver goalkeeper Evan Ince saved the spot kick, preserving the shutout and victory.