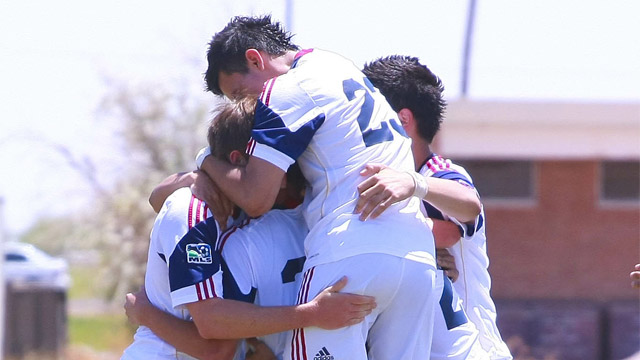 Ten long months of Development Academy soccer are in the books, and 32 teams managed to best the opposition to book playoff spots this week in Frisco, Texas.

Here’s a brief look at each U16 team, players to watch, and the schedule for the playoffs (all times local):

At this stage of the season, every group is set to be competitive, and this one won’t disappoint. On paper, CASL Chelsea FC (17-2-6) is well equipped to compete with the two MLS Academies involved in FC Dallas (15-6-10) and New York Red Bulls (16-6-4).

The North Carolina club has its share of top talent, including Evan Deycaza and exciting winger Eric O’Neil, who is committed to North Carolina. Deycaza enters playoffs on a roll, as the forward has scored 10 goals in his last four games in the Academy.

However, the Red Bulls bring Adam Najem (Akron), Ismar Tandir, Alex Muyl and Amando Moreno to the party, and will look to stamp their authority on the group.

One of the X factors in this group is whether Kellyn Acosta lines up for the U16 or U18 FC Dallas squads. His presence in the middle of the park could be the tipping point for the hosts.

Last but not least, Georgia United (12-5-8) punched a ticket to the playoffs in their first year and are out to extend their season further. Defender Cameron Johnson is certain to face a difficult test against the potent attacks.

With size, pace, and good technique, the Maryland-bound midfielder was last seen lining up at left back at last summer’s U17 World Cup. His experience and ability could be the decisive factor in FC Dallas topping the group.

Prediction: Despite facing two top MLS Academies, look for CASL Chelsea to snatch the top spot, as Deycaza continues to pound the back of the net.

The Dallas Texans (21-3-7) started the season on a 19-game unbeaten run, but have lost two of their last five games including a 0-1 loss to Texans SC Houston last week. 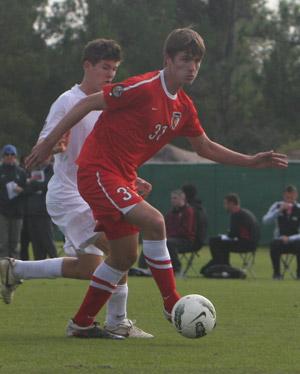 While the Texans should be helped by the return of Brandon Aubrey to the U16 squad after he played the last few games with the U18 team, there is still reason to be cautious about the local favorites advancing from this group.

New England Revolution (17-6-3) is undefeated in its last ten games with an 8-0-2 record. The MLS Academy has a wide array of scoring threats on the roster, but Mawolo Gissie has been the main workhorse this season with 15 goals in 23 games.

There is plenty of talent on Albertson (12-4-10) as well, but the New York club has been shuffling players up and down its teams all season and will likely have its top ‘95s with the U18s at the playoffs.

The real wild card of the group is one of the final teams to make the postseason, Pateadores SC (12-5-10). The Southern California club has not played since May, which is a disadvantage, but it should have a full roster for the playoffs – something the Pats have rarely had this season. If Kevin DeLaTorre, Christian Carrillo, and Brian Pacheco are clicking, the Pateadores attack is amongst the top in the nation.

Under the assumption that Aubrey stays with the U16s during the playoffs, he could be the difference maker in this group. Aubrey is the commanding presence in the middle of the field that every team needs in these three-game tournament formats.

Prediction: Dallas Texans advance – the local team makes the hometown proud, but it comes down to the wire.

Another debut Academy side in the Vancouver Whitecaps (17-6-3) punched a ticket to the playoffs. It’s no surprise given the commitment to youth development the Canadian club has shown with their residency program. Brody Huitema, a 2013 graduate committed to Stanford, scored 20 goals and will need a strong performance to give Vancouver a shot at finals week. 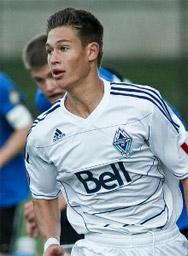 One of the toughest opponents in the group is sure to be the South Carolina United Battery (17-5-3). Forward James Carlin packs a goal-scoring punch, and Dakotah Millard bosses the midfield.

Rounding out Group 3 is FC Greater Boston (14-7-5), led by midfielder Alex Ainscough and defender Marc Greenblatt, and Charlotte Soccer Academy (11-8-6), the lowest seed in the U16 age group, out to spring a surprise on their group.

His goals notwithstanding, Huitema’s quality is important and the Whitecaps need a big week from him.

Prediction: A difficult group to read with a pretty even quality all around, South Carolina United Battery grab first despite recently returning from a long break for high school soccer.

With Real Salt Lake-Arizona’s Jordan Allen playing up with the U18s, this group is lacking its best player but it does not lack good players.

Chicago Fire (15-3-5) enjoyed the recent return of U.S. youth national team defender AJ Jeffries from an extended absence due to injury. His return plus the solid play of goalkeeper Kyle dal Santo makes Fire a formidable defensive force in this group.

RSL-AZ (17-6-4) counters with the most impressive attacking quartet of the group, which includes standout midfielders Andrew Brody (Louisville-bound) and Trevor Hyman (Stanford verbal commit) as well as strikers Benji Lopez and Jose Navarro.

Seattle Sounders (15-7-4) and Clearwater Chargers (12-6-7) round out the group. Sounders, while a solid roster overall, will be looking for U.S. U18 Men’s National Team center back Jalen Markey to help see them through in Group 4.

RSL-AZ coach Freddy Juarez called Navarro the heart of the team. While he does have a flair in front of the goal, it is the determination and work ethic from Navarro that really sets the tone for this team.

Prediction: Chicago Fire advances. The staunch Fire defense proves too tough for the other three sides to break down in the Texas heat.

There’s not a lot separating this particular quartet of teams, and like many groups, will likely come down to the final day. Crew Soccer Academy Wolves (17-2-4) boast an impressive record and solid talent in Matthew Habrowski, Yamann Sahlool and Ali Jawad.

Down in Frisco, a familiar face to U.S. Soccer will be on the sidelines as Tab Ramos is head coach of NJSA 04 (14-8-5). Midfielder Matt Robinson and forward Conor Nichols provide most of the punch for the Jersey club.

Few teams at the playoffs will be as battle-tested as Texans SC Houston (19-8-4) grabbed second place in the Texas Division. Playing not too far from home, a strong week from Emmanuel Usen (22 goals) would go a long way in clinching a Finals Week spot for the Texans in their own back yard.

Shattuck-Saint Mary’s (12-5-4) are one of a handful of clubs to be represented in the playoffs in both age groups. Santa Clara-bound forward Steve Eneme offers the biggest threat for Shattuck up front.

A left-footed center back with experience at various levels of youth national teams, Habrowski is going to be the key for the Wolves defense in stifling the opposing attacks all week.

Prediction: As previously mentioned, there’s little between these teams -- the added incentive of the Texans SC Houston of getting to play Finals Week at home pushes them over the top.

LA Galaxy (17-3-7) only lost three games this year . . . one defeat came against Concorde Fire (15-6-4). The Atlanta club beat Galaxy 3-1 when the teams faced off during the Winter Showcase in December.

Duke verbal commit Cameron Moseley scored twice in that game on his way to an 18-goal season in the Development Academy.

However, Galaxy will have Justin Dhillon, one of the top uncommitted players of the 2013 class who missed the first meeting between these teams, for this showdown. Dhillon is the player who creates the most matchup problems for opponents. The 17-year-old scored 20 goals this year thanks to a soft first touch and impressive ability to hold defenders off the ball.

D.C. United (15-7-5) and Colorado Rush (10-5-6) round out the group. Both teams possess lethal finishers. United claim Michael Seaton (12 goals) and Nigel Robinson (11 goals) as the fearsome duo up top while Ian Harkes and Cristhyan Najar boss the midfield. United will also enjoy the return of U.S. U17 MNT midfielder Jorge Calix to the roster. Calix has six goals in six games since returning from Residency.

Rush brought forward Thomas O’Brien down from the U18 squad, where he played all season, to join his age appropriate group for the playoffs.

There are a number of good strikers in this group, so it may be up to the defense to really help settle who will take the spot in Finals Week. Suliaman Dainkeh, a Maryland verbal commit, is perhaps the top defender from the group.

With Moseley, O’Brien, and Galaxy’s Jamie Villarreal on the schedule, Dainkeh is going to be sharp to keep D.C. United alive in this group.

Prediction: LA Galaxy advance. Galaxy’s style of play is difficult to handle for teams that are not used to high pressure and quick attacking soccer.

Four different corners of the country are represented in this group, and the depth and quality is certain to make this a tight one.

Weston FC (14-4-7) finished with the second-best points per game average in the Wild Card, and Nicholas Pappacena’s 18 goals is one of the main reasons to think Weston can make some noise in Frisco.

Of course, one of Weston FC’s group counterparts clocked in with the best points per game outside of a top two division finish -- Arsenal FC (17-3-7) The Southern California club is set to bring a healthy Paul Arriola with them, and his presence is likely to figure prominently.

It goes without saying that the other two teams will have plenty to say about that. PA Classics (11-7-9) big guns are Connor Maloney and Joseph Julius, their two leading scorers, while Chicago Magic (12-4-6), a team entering playoffs unbeaten in their last fives games and haven’t lost a game since April.

While he’ll be coming into playoffs fresh off an injury, Arriola has the ability to create offense by himself and if he’s in form enough could end up guiding his side to a Finals Week spot.

Prediction: Arsenal FC advances. Arriola might be limited, but the group around him is good enough if he isn’t quite firing on all cylinders yet.

The no. 1 overall seed of the playoffs Players Development Academy (20-2-4) lost its first and last games of the regular season. Sandwiched in between the defeats was a 24-game unbeaten run that included only three games where PDA conceded more than one goal.

Simply put, PDA is very good, but also very young. The squad includes a number of U15/U14 Boys National Team players like goalkeeper Kevin Silva and defender Danny Barbir. Fortunately for the New Jersey club, head coach Sam Nellins should have his full choice of the squad with no players absent due to youth national team duty.

Solar Chelsea SC (16-6-9), on the other hand, will be compensating for the loss of leading scorer Alan Winn to the U17 Men’s National Team. Winn led the Development Academy U16 age group in scoring this season with 23 goals in 30 games.

San Diego Surf (14-8-5) will have a similar setback with forward Corey Baird also playing with the U17 MNT in Costa Rica.

With only four goals to his name, Brian Iloski won’t stand out on any scouting report but for any one who has seen Surf play this year knows he is the brains behind the operation. Dynamic on the ball and lethal with the pass, Iloski could turn this group on its head.

Prediction: PDA advances. Despite the talent on the other rosters, PDA, as a team, has been superb this year and the run does not stop here.