The U18 Academy Playoffs kicked off on Monday evening, and following right behind it are the U16 teams that traveled to Frisco, beginning its competition Tuesday evening.

It’s been another long and demanding Academy season. Here’s a break down of the U16 playoff field:

De Anza Force (19-3-6) just might be the favorite in this quartet. The NorCal side navigated its way to the top spot of a very competitive Northwest Division, capturing the top spot, thanks to the goal-scoring prowess of Carlos Delgadillo, whose 15 strikes on the season have been vital to success. The team enters the postseason having played just three games since the start of May, so rust could be a factor. 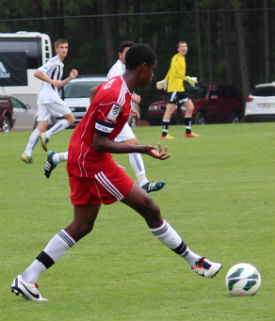 It’s far from a one-horse race of course, as a battle-tested Chicago Fire (16-5-6) will be a tough team to knock off. Pulling the strings in the middle – if he makes the trip to Frisco – is U17 Men's National Team midfielder Collin Fernandez, who will look for 12-goal scorer and Denver-commit Alex Underwood up top.

The contingent from Georgia United (13-3-9) boasts three players who were involved with the Jamaican U17 MNT at the qualifying tournament in Panama: Malcolm Stewart, Nicholas Nelson and Zachary Jones. The trio, along with goalkeeper Marius Heislitz, helped the team concede just 24 goals in 25 games, second best in the division.

Few sides enter the Academy playoffs as battle-tested as Arsenal FC (14-8-6), which survived the Southwest Division against Chivas USA, Real Salt Lake-AZ and Real So Cal. That experience is going to be needed in Frisco if this outfit hopes to spring the upset and make it to Finals Week.

Player to Watch: Collin Fernandez, Midfielder, Chicago Fire: While his appearances with the Fire have been sporadic, the midfielder spent the spring in the USSF Residency Program and has the talent to flourish in big games, not to mention the international pedigree to make a big difference.

Like many teams at the Academy level, Baltimore Bays Chelsea (19-4-2) boast a strong goal scorer who played a major factor in the successful regular season campaign. Forward Abdallah Bangura’s impressive 20-goal tally will certainly mean he’s a marked man as the prominent Maryland club will look to get the better of a group that includes another Chelsea affiliate.

Emerging at the top spot from the Southeast Division, CASL Chelsea (17-6-2) don’t have a single outstanding star to rely on, but a collective effort that minimized goals conceded and balanced that out with timely scoring. A club with plenty of pedigree and experience at this stage of the Academy competition, they are quite capable of making something happen and topping the group.

The Frontier Division is no joke, meaning the Colorado Rapids (16-8-3) will be both road and battle tested in Texas, having shuffled down there on more than one occasion in the regular season. Midfielder Enda O'Neill is one of the key midfield cogs for a team looking to make some noise.

The last team to qualify for the playoffs mathematically, Revolution Empire (12-8-5) won its last game of the regular season thanks to Ben Derleth’s tally, his 12th of the season. Any hopes of pulling off a surprise and finishing the top spot is likely to land on Derleth’s shoulders and his ability to find the back of the net. Ado Bakalobic has also figured prominently this season.

Player to Watch: Enda O'Neill, Midfielder, Colorado Rapids: His other brother Shane might be the higher profile Rapid, having signed with the first team, Enda has already played his way into training sessions with the first team, and the youngster will no doubt look to capitalize on his chance at the national stage.

An extremely tough group with four solid teams, traveling the least for playoffs will be the local Dallas side Solar Chelsea SC (19-6-2). If U.S. U17 MNT attacker Alan Winn is available and makes the trip, it could help turn the tables in favor of Solar, which would have a nice one-two attacking combination with Winn and Bryson Asher.

That’s not to say other teams won’t have the requisite firepower. D.C. United (16-4-5) does boast one of the U16 leading scorers in Gerson Umana, and are backstopped by goalkeeper Arie Ammann. Graydon Hester reached double digits with 10 tallies as well, on a D.C. team that has plenty of quality optinos available.

Future Northeastern forward Harrison Swartz (17 goals) will look to lead his line in a competitive field on an FC Bolts Celtic (14-7-4) squad that can make things happen offensively.

Rounding out what is going to be a deceptively tough group is Chicago Magic PSG (15-9-3), which boasts the attacking talents of Elijah Rice and Andrija Novakovich, who have 25 goals between them heading into the Academy Playoffs.

Player to Watch: Alan Winn, Forward, Solar Chelsea: The U.S. U17 Residency forward missed most of the season while in Florida, and his addition to this group could be what it needs to finish atop the standings.

On the back of an impressive defense – just 17 goals conceded in 27 games – Crew Soccer Academy (19-4-4) compiled a strong record and first place finish in the Mid-America Division. Anchoring the back line is Michigan State recruit Jimmy Fiscus, while Hunter Barone and Kostandin Moni provided most of the goals this season. If U17 MNT forward Ahniga Selemani makes the trip to Frisco, it could be a tipping point for this group to seize first place.

The Wolves will have to break down a solid Seattle Sounders (17-4-7) squad, which enters the playoffs on a four-game winning streak. If forward Denis Kalamar can make a return from a broken foot, his goal-scoring ability would be a welcome addition.

With just one win in its final five regular season games, Real So Cal (17-8-3) isn’t exactly peaking heading into the playoffs. However, there is talent available, including leader scorer Carlos Gonzalez (17 goals), BNT goalkeeper Justin Vom Steeg and U17 vet John Requejo Jr.

After a midseason lull, Orlando City (13-8-4) has righted the ship of late, unbeaten in its last four games. Richard Prestridge is the team’s danger man, scoring 20 goals on the season and can find teammates in the final third as well.

Player to Watch: Richard Prestridge, Forward, Orlando City: On a team that has struggled to pick up results in the second half of the season, Prestridge has the ability to change the game with passing and finishing abilities.

New Jersey has plenty of talent at the youth ranks, and despite the close proximity of the Philadelphia Union and New York Red Bulls, Players Development Academy (20-4-1) has another talented group looking to make noise at a national event. Daniel Barbir, a member of the U15 BNT, leads the attacking line, with the help of Brian White’s 16 goals on the year.

A squad that made its way into the playoff on the back of a strong finish to the regular season, Albertson SC (15-6-4) is riding a four-game winning streak heading into Frisco. Recent Columbia recruit Arthur Bosua provides the team’s main offense, with 16 goals in 19 games.

Coming into Playoffs from a tough season in the Frontier Division, Texas Rush (14-10-3) isn’t a team to sleep on despite the ten losses on the season, as they’ve lined up against some pretty tough opposition.

Another Wildcard entrant, Crossfire Premier (15-8-5) know how to score goals, with 14 players on the roster tallying at some point or another this year. Satoshi Chaffin led the way with 13, and he’ll need to be at his best to give his side a shot at the top spot.

Player to Watch: Daniel Barbir, Forward, PDA: A very talented player with U15 BNT experience, the forward with good size can make a statement by spearheading his talented PDA side.

It’s clear that FC Dallas (21-4-2) knows how to not just identify, but also get the most out of its talent. Forward Santiago Agudelo (19 goals) represents the team’s highest scorer, but he’s far from the only talented player on the roster, as Wilfred Williams, Aaron Meyer and Coy Craft all bring plenty to the table. 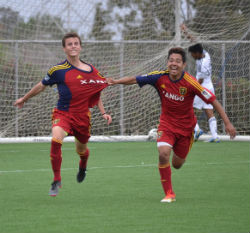 Real Salt Lake-AZ (17-6-5) certainly has quality to compete with the host side, but a lot may depend on which players make the trip, and who ends up staying down to play at the U16 age group. Talented players in this group include Brooks Lennon, Sebastian Saucedo and Justen Glad, and they are a certain threat to finish first.

With those two MLS clubs bringing tremendous talent to Frisco, FC Delco (14-7-4) and Sockers FC both have their work cut out for them to push for the top spot. Doyle Tuvesson (16 goals) helped fire the PA side into the playoff mix, while Sockers are riding high heading into playoffs, with nine wins out of its last ten games.

Player to Watch: Brooks Lennon, Forward, Real Salt Lake-AZ: The younger Lennon made an impression with a 97 MNT that recently traveled over the Azerbaijan for the Caspian Cup. Can he replicate that success under the hot Frisco sun?

Last year, the Red Bulls (21-1-3) swept to a Finals Week victory at this age group. And while most of that team is now competing with the U18s this week, that doesn’t mean there is a drop off in talent with this group, with youth internationals Malcolm Dixon and Wesley Wade will be a handful in this group. Kevin Politz provides a stern presence along the back line on a team that has scored 78 goals and conceded only 8 on the season.

They’ll have to lock up Houston Dynamo (18-5-4) in order to do so as well. Any team from Texas to emerge with a playoff spot is going to be tested, and the presence of Elochukwu Ozumba and his 20 goals is definitely going to give Houston a fighting chance.

PA Classics (13-9-3) might not have the most overwhelming record, but the one-two punch of McKinley Curran and Christian Pulisic who combined for 25 goals might see the PA side put something together this week.

Not to be outdone, Concorde Fire (13-6-6) rounds out the group with an impressive goal scorer Dembakwi Yomba leading the attacking line.

Player to Watch: Christian Pulisic, Midfielder, PA Classics: In a group full of talent, the youth national team player with impressive skills has a huge opportunity to upstage MLS Academy counterparts and bring his team close to a Finals Week spot.

Top scorer Caleb Calvert has moved on to the U18s, but that doesn’t mean Chivas USA (20-3-5) is any less dangerous. Adonis Amaya, Bradford Jamieson and Alejandro Vergara are all players with the ability to confound opponents and make the SoCal side group favorites.

A solid program from the Southeast, South Carolina United Battery (13-9-3) snagged one of the last Wildcard spots and needs a big week to make something happen in Frisco. The dynamic duo of Rex Epps and Michele Bottari provided just under half of the team’s offensive output this year.

Putting together a nice season behind the Red Bulls, Oakwood SC (15-4-6) are no slouches and can make an impression in Frisco. Xavier commit Matthew Vasquenza has been one of the team’s most consistent players on the season.

Repping Texas in this group will be Texans SC Houston (16-6-5). Forward Bryce Marion’s 17 goals were by far the most on the squad this year, and the Houston-based program will look to capitalize on their familiarity with the Texas heat.

Player to Watch: Adonis Amaya, Forward, Chivas USA: Despite not getting an invitation back to the Residency program this year, Amaya is one of many dangerous attackers on this team that makes the MLS Academy the group favorite on paper.