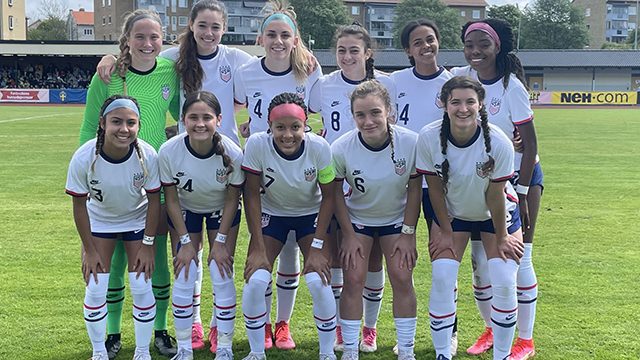 It was a successful return to competitive action for the U.S. Under-16 Girls’ National Team, which wrapped up a trip to Europe last week with three wins.

The tournament opened on May 18 with a matchup against Norway. Kennedy Roesch finally earned the breakthrough before the first half in that match, while Ines Derrien, Reese Klein and Ava McDonald tallied in the game’s final 12 minutes to round out the scoring.

Facing a daunting challenge against France on May 20, the U.S. squad were able to find a way past the traditional youth power. Avery Robinson, Jordyn Bugg and Sophia Bradley scored in the second half in a 3-1 win.

After going down a goal against Sweden in the final game, the U.S. roared back with four goals in the second half to wrap up the trip with a win. Kennedy Roesch, Carla Small, Ava McDonald and Emeri Adames provide the second half offense to secure a 4-1 victory.

Below are the starting lineups from each game for the U.S. U16s.