U16 title matches wrap up US Youth National 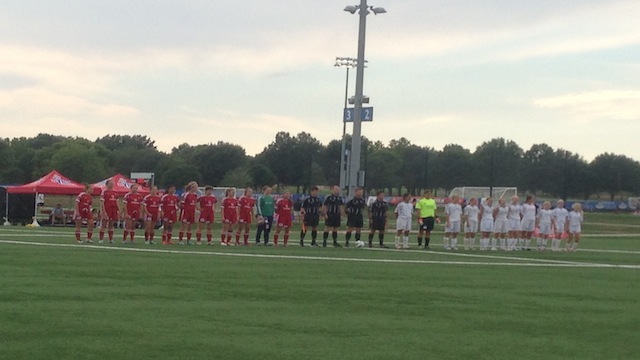 OVERLAND PARK, Kan. - The final day of the US Youth Soccer National Championships was Sunday morning, and the teams scratched hard for winners after the first title-holders were crowned Saturday night. Below are the highlights from the U16 boys and girls championship finals.

The Sharks and the Kings gave all they had in this epic showdown for the U16 Girls championship title. Kings Hammer controlled the game and possession for the first 15 minutes of the match, keeping the ball on their offensive half and having a few shots on goal.

The Sharks got their bearings in the second part of the first half, switching possession to their offensive half and enjoying multiple scoring opportunities. The Kings were the first to capitalize on an opportunity, when clean passes led to a goal by Sydney Kilgore in the 25th minute.

The Sharks were able to equalize in the 68th minute off of a strike by Kirsten McBeain. This was the last goal of regulation time, sending the Sharks and the Kings into overtime.

An early overtime goal by Lauren Nemeroff appeared to seal the game for the Kings. However, in stoppage time of the first overtime period, the Sharks were able to equalize after a volley in front of the net. The remainder of overtime play would be scoreless, resulting in a PK shoot-out to decide the winner.

Sharks’ Hailey Harbison and Shelby Lee and Kings’ Katie Murray and Payton Atkins all sent their shots into the back of the net, keeping the shoot-out even. Gianni Montini sealed another for the Sharks, while Brittany Mahoney stepped up for the Kings. Sharks GK Melissa Lowder made a diving save on Mahoney’s shot, giving the lead to the Sharks. Kirsten McBeain and Hannah Keogh both scored on their shots, sealing the deal and making the DMCV Sharks U16 National Champions.

An early goal for the Smithtown Kickers gave them control of the remainder of the game. They played the width of the field, made clean passes and long balls to the corners of the field.

GSA Phoenix fought to match up, having a few scoring opportunities in the first half that went unfinished. This match up between Smithtown and GSA Phoenix turned physical, each team fighting with everything they had.

Smithtown was able to double their lead in the 65th minute, when Harrison Weilbacher sent a ball across the GK into the far corner. GSA Phoenix struggled to finish, and both Smithtown goals would go unanswered, giving them the national title.