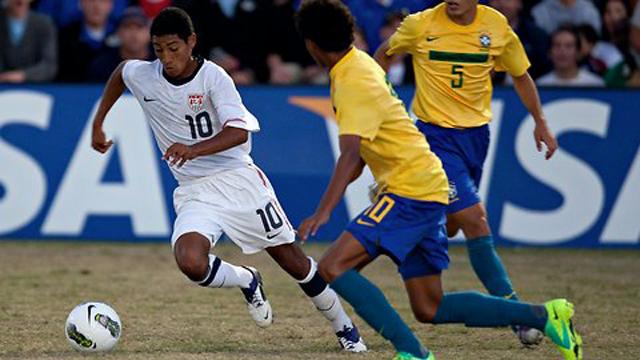 (TopDrawerSoccer.com Managing Editor Robert Ziegler recently spent part of a week in Bradenton, Florida with the U17 Men’s National Team residency program. Following is one of a series of articles about what he saw and heard there).

BRADENTON, FLORIDA – The U17 Men’s National Team recorded a pair of 6-0 victories against a local club team here Saturday in an exercise that allowed coach Richie Williams and his staff to look at the entire squad with a trip to France for an international tournament looming on the horizon.

Williams was guardedly upbeat on the progress of the team after the matches against Florida club Tampa Bay United.

The U17s have played a number of MLS and college teams over the past few weeks and the lineup from those games gives a pretty good idea of who is currently top of the pecking order in the battle for spots in the starting 11. All 31 squad players saw action over the course of the two Saturday contests, but the squad was spread evenly through the two matches and the current starters tended to play less, not more, on the day.

The U17s intent was to attack early and often, and they accomplished this in large measure. Georgians Shaquell Moore of Cobb FC at right back and DeAndre Robinson of Concorde Fire at right forward  in the 4-3-3 were employing torrid pace with effect in the early going.

But it was Chivas USA standout Bradford Jamieson who notched the first goal, finishing smartly after some tight passes by Aaron Meyer and Ahinga Selemani. Jamieson then turned provider on the 2nd goal, hitting a quick and low cross for Robinson, who adroitly volleyed home from close range for a 2-0 advantage.

The U.S. side was just getting started. Meyer, a hard-working midfielder from Dallas, Texas, released highly-regarded DC-area prospect Junior Flores with a clever pass, and Flores was gone in a flash, leaving defenders in his wake before applying the 1v1 finish for a 3-0 USA advantage.

The Florida side caught the U.S. on a counter that should have resulted in a goal, but the U.S. defense was spared blushes via a missed open header. The U17s regained tactical control shortly thereafter, as Ann Arbor, MI resident Ahinga Selemani beat his man on the left and sprinted the next 30 yards toward goal before finishing with a bank shot off the far post to make it 4-0.

After some halftime substitutions, the chances kept coming for the U.S., and Selemani knocked home a rebound after Jorge Calix struck the post from Adonis Amaya’s good cross.

Amaya is an intense competitor who got forward quite a bit in the 2nd half from his left back position. The Chivas USA player can get a little down on himself when things don’t go right, something assistant coach Jim Rooney was encouraging him to rise above during the match. His club teammate Bradford Jamieson just glides down the left wing and has some decent footskills and finishing ability to go with the athleticism. Jamieson’s excellent cross provided the final goal of the match, with defender Conor Donovan ghosting in to volley home from close range for a final scoreline of 6-0.

Tampa Bay earned a penalty in the closing minutes but the spot kick was blazed over the crossbar. Meyer had to leave the game a bit prematurely with a cramp on the hot day, but Williams, Rooney and Anthony Latronica continued coaching the squad right to the final minute, encouraging them to make the most of the match time, working to improve each squad member but also encouraging them to not be discouraged when things didn’t go quite right.

As the midday sun burned onto the field and players, the 2nd match seemed to be played at a slightly slower tempo in the opening minutes. The lid-lifting goal was made in California, with Cal Odyssey’s Elijah Martin hitting a fine cross from his right back position for San Diego Surf forward Corey Baird to finish with his head.

DC United’s Jorge Calix and Minnesota Thunder forward Mukwelle Akale both had good scoring chances in the subsequent minutes, but Tampa Bay goalkeeper Christian Knight made a pair of good saves to keep the match close. Knight rose to the occasion again after Baird had fed Akale with a good pass, stretching along the ground to keep the ball out.

A 2nd U.S. goal came shortly before the break when left back Caleb Duvernay of CASL ran down the left and cut a pass back for New York Red Bulls forward Wesley Wade to finish for the 2-0 advantage.

After a number of substitutions were made at the break, Westside Metros’ left forward Rubio Rubin stretched the U.S. lead to 3-0 with a good run down the wing and an even better finish from a sharp angle. Tampa Bay nearly pulled one back after catching the U.S. on the break, but Marius Heislitz of Georgia United came up with a stretch save to preserve the clean sheet.

The 4th U.S. goal may had been the nicest of the two matches. Duvernay started the move by running down the left and firing a cross toward Baird, who was waiting at the far post. Baird intelligently laid the ball off for Rubin who finished well to make it 4-0.

The team was very much in the mood by now and made it 5-0 when Real So Ca’s John Requejo ran through the middle and fed Lawrence Taiwo on the left, the big striker using a good first touch to position himself for the finish. There was time for one more and this time the move was started by Indiana United’s Cameron Lindley with a 40-yard swerving ball struck to the wing to unleash Rubin. The Portland-area player’s cross found San Jose Earthquakes midfielder Angel Heredia and he put the ball in the back of the net for a final score of 6-0.