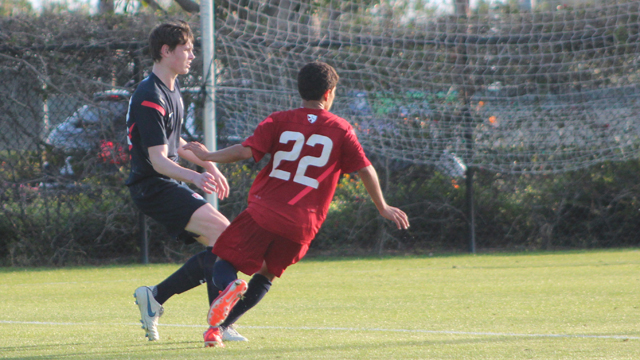 CARSON, California - The slight edge in experience was all the U.S. U17 Men's National Team, composed only of players born in 1997, needed to defeat their younger counterparts over the course of a pair of scrimmages at the Home Depot Center on Wednesday night. The U17 MNT registered 2-1 and 4-2 victories in the games that showcased the future of the Federation.

The 97 group is in its first camp together since graduating from the U15 level last fall. This birth year is an off-year for the FIFA U17 World Cup, but usually plays a crucial role for the U20 World Cup in the coming years, which is why this camp and future events were added to the schedule for 2013.

The 98 age group is in its third camp under U15 Boys National Team head coach Tony Lepore, as it continues to identify players and build a playing style for the next U17 World Cup cycle in 2015.

"I thought it went great for U.S. Soccer," Lepore told TopDrawerSoccer.com. "It was a special game tonight. This is the future, and the future is really bright. I think a lot of these guys will be playing together when the U20 cycle comes around [in 2017]."

Realistically, this would be classified as the 'A' team, as the core players from both age groups featured in the starting lineups for both teams including a tantilizing matchup between Cameron Lindley and Joshua Perez in the center of the pitch. The older Lindley got the best of his younger adversary on the day, as the defensive midfielder held down the center of the field and quieted the budding star of the U15 side.

All three goals came in the second half, as the opening 35 minutes did not feature much threat on either net with a lot of the action in between the two 18-yard boxes. The lone exception came in the 10th minute when Joe Gallardo's blocked shot fell to the feet of Christian Pulisic. The left winger had a clear look at goal, but just tried to place it too much and the shot hit off the post and went out for goal kick.

DJ Villegas opened the scoring with a deflected effort from 25 yards out. The right winger had the ball fall back to him after a quick attack, following a U15 BNT giveaway by the defense, was briefly interrupted by a recovering player. The Davis Legacy attacker hit the ball cleanly, but it took a slight redirection, which threw off goalkeeper Abraham Romero and was enough to sneak into the net.

Pablo Pelaez doubled the lead for the older side when he streaked down the left side and received a great diagonal pass from Siad Haji. Palaez buried his shot into the far corner of the net for the second goal of the game. Much of the buildup to the goal came thanks to Haji's composure on the ball in the center of the field, and vision to pick out Palaez's run down the side.

Minutes after the Palaez goal, the U15 side answered back with a tally off a corner kick. Pulisic served the ball into the box that Justin Vom Steeg went out to collect, but a mass of bodies held him back from catching the cross. Left back Hugo Arellano was there to volley in the rebound and cut the lead to one goal.

The younger side would not get any closer in the final four minutes of the clash, as the U17 MNT held onto the victory in a similar fashion to six months again when these two age groups played to a 1-0 result to the 97 side.

The second game of the night featured a number of new players to both age groups, but it also showcased some flair in front of the goal.

The older side burst out of the gates with two goals in the opening five minutes. Fullerton Rangers maestro Amirgy Pineda hit an absolute stunner from 18 yards out on the half-volley that smashed off the post and into the back of the net.

Minutes later, Brooks Lennon torched the left side of the U15 BNT defense and sent in a cross to Rigoberto Rojas that was an easy tap-in for the target forward.

The '97 group nearly put the game to bed in the opening 10 minutes when Lennon got behind the defense again and sent in a cross for Jorge Ruiz, who was open at the top of the box. Ruiz's shot was blocked out for a corner kick by goalkeeper Kevin Silva.

Haji Wright tried to will his side back into the game in the opening stages and was rewarded for his efforts when he was brought down in the box. Wright stepped up and converted the penalty kick to cut the lead to 2-1, which is how the teams would go to half.

The second half was nearly identical to the first with the older side getting off to a flying start in the opening minutes. Ruiz and Lennon both found the back of the net in the opening 17 minutes of the latter stanza to push the score to 4-1. Lennon's goal was the best on the day, as Chicago Magic PSG midfielder Abuchi Obinwa brought the ball up from the defensive third with the help of two combinations in the center of the field before he hit a through ball to Lennon that set-up the goal. Lennon finished the day with a goal and two assists.

Lagos Kunga, a second half substitute, cut the lead to 4-2 with 14 minutes left when he cut in from the right side and hit a left-footed effort that snuck inside the near post.

The U17 MNT held onto the ball in the final minutes of the game thanks to Sebastian Saucedo, Pineda, and Obinwa in the middle of the field.