U17 MNT World Cup vets get run in MLS 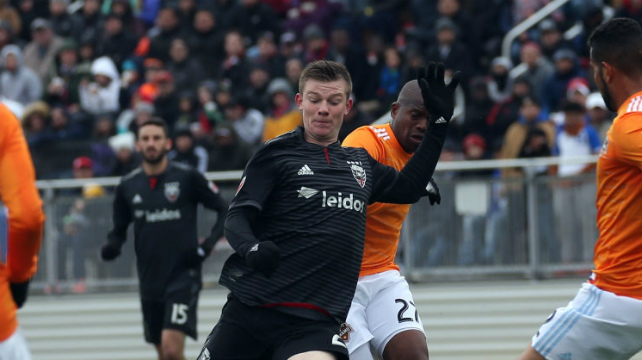 Tracking the progress of the 2017 U.S. U17 Men’s National Team World Cup squad is going to be a dominant theme of the current MLS season.

Two key members of that squad continued to look solid in substitute appearances, as Chris Durkin (D.C. United) and Andrew Carleton (Atlanta United) both fared well from the bench.

Durkin’s appearance came with much higher stakes. The holding midfielder entered Saturday’s 2-2 draw against Houston with his D.C. side trailing by a goal. A knock suffered by Junior Moreno opened the door for the 18-year-old American, and he held his own in a 20-minute cameo.

With D.C. chasing the game, Houston wasn’t exactly attacking with guns blazing. That gave Durkin time and space to pick a pass like the one below, that his teammate Yamil Asad failed to convert.

Aside from that one key pass, it was perhaps Durkin’s best stint in his three appearances to start the 2018 season. He dropped between the center backs to collect possession, competed physically on more than one occasion and was solid with his positioning. Between Moreno’s potential injury and international call-ups, Durkin has a very good chance of picking up a first MLS start on Saturday in Columbus.

Down in Atlanta, Carleton’s quest for minutes continued to pick up momentum, as he subbed into Atlanta United’s 4-1 win against ten-men Vancouver in Saturday’s MLS action.

There was hardly any pressure on Atlanta in the 78th minute when Carleton took the field, and he fared relatively well.

Carleton was somewhat involved in the sequence where Vancouver scored their lone goal. At that point, United was up 3-0, and Carleton took on a couple of defenders at the top of the box. However, he lost the ball, and the long pass into space ended up finding Vancouver forward Erik Hurtado, who cut into the home side’s lead. Hardly Carleton’s fault alone, though he’s the kind of player that runs the risk of turning the ball over due to his willingness to take on defenders.

His response, however, was the find Josef Martinez at the back post for Atlanta’s fourth goal. Afforded time and space by the Whitecaps, Carleton delivered a pinpoint ball for Martinez to complete his hat trick.

It wasn’t all positive news for last year’s veterans, as James Sands remained on the outside looking in for the NYCFC squad, as he played 90 minutes for the U19 academy instead.

The game may have been done-and-dusted by the time Paxton Pomykal entered as the sub, but the FC Dallas homegrown made the best of the situation in a 22-minute appearance.

Just looking at it from a statistical perspective, Pomykal’s numbers were at a level you’d expect playing against 10 men. With FC Dallas leading 3-0 against the Seattle Sounders, the 18-year-old nevertheless went about and put in a crisp performance. He completed all 14 passes, but more importantly, showed a high defensive workrate against a beaten opponent. He had three recoveries, a clearance and won a tackle. The highlight reel moment came in the 76th minute, when he went on a long marauding run that culminated by winning a foul in the attacking third.

Granted, the caveats apply. Sounders were playing down a man and at that point, had little to play for. Still though, between that and the news that Pomykal is no longer heading to Spain with the U.S. U20 MNT and will be in the FCD squad next weekend, it’s another positive step. Not to mention it’s rare to have a couple of young, domestic attacking players starting to show signs of life in MLS.

The 2018 USL season kicked off over the weekend, with Seattle’s USL faring much better than their parent franchise.

S2 defeated Timbers 2 in the first-ever game in Tacoma, Washington, with Seattle opting to start a double pivot of two current academy players: Dylan Teves and Cameron Martin. Neither are physical specimens in the center of the park, as both very much looked like a couple of kids sitting deep.

But they both were solid enough on the day, laying the foundation for Seattle’s 2-1 comeback win against T2. And while the game was direct at times, they did both get involved, Teves attempting 62 passes (completing 82% of them) and Martin attempting 51 (completing 88%). The pair are committed to DI programs for the fall, with Teves heading to Washington and Martin signed with San Francisco.

That pair was far from the only two amateurs involved in the encounter. Overall, the average age of S2’s starting lineup was 19.6. Along with that, Jake Morris came on as a sub for S2, while Timbers Academy players Lucas Cini and Carlos Anguiano entered for T2. Also of note, Nicholas Hinds scored a goal and drew a penalty, making his USL debut after leaving Akron this offseason.

The Sounders and Timbers organizations were far from the only two USL sides to lean on current Development Academy players in first team place. St. Louis FC handed a start to Aedan Stanley, the left back and Duke commitment.

Stanley went the full 90 prior to making the trip to Spain to join up with the U.S. U20 MNT on this week’s European training camp, putting in a solid shift in a 1-1 draw against RGVFC. Stanley attempted just 22 passes but was getting into the attack on a handful of occasions throughout the game. He demonstrated a solid positional sense and was rarely caught out of position. He made six tackles, two clearances and had one interception.

His exposure at this point in his career to the professional level is invaluable, and provided he ends up at Duke in the fall, he will be one of the top freshmen in the ACC this year.