U17 MNT wrap camp with big win over LAG 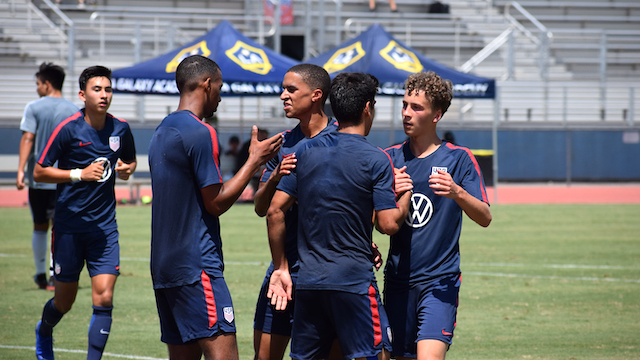 CARSON, California - The U.S. U17 Men’s National Team wrapped up August camp on Tuesday with a commanding 7-0 win over LA Galaxy II (the USL side of the MLS franchise). The game was relatively even in the first half as LA Galaxy used a number of players who have appeared in the USL Championship. The second half was incredibly lopsided as LA Galaxy put out a number of academy players.

NYCFC’s Andres Jasson scored the first goal of the game early in the first half. The goal came off a set piece from Griffin Yow. The DC United winger played in a low hard cross to the near post that Jasson directed on frame for the early tally.

LA Galaxy had a chance on an equalizer five minutes after the opener. USA tried to play it quick and short on a free kick near the center circle. LA Galaxy pounced on the congestion of players in the area and won possession. The USL side rapidly transitioned into the attack and created a shot inside the box that was blocked out for a corner kick.

Galaxy had another chance in the 30th minute when one of the midfielders (Galaxy did not wear jerseys with numbers for the game) off Bryang Kayo as USA was trying to build out of the back. The shot from Galaxy went wide of the target.

USA gained a two-goal advantage before half thanks to Noah Jones. The RB Leipzig forward tapped in a cross from Jasson. The play started with patient build-up from the USA defense. Kobe Hernandez-Foster hit the decisive pass that sent Jasson in free down the wing after his defender tripped while trying to catch up with him. Jasson picked out Jones in front of the goal for the easy finish.

Jones was denied another goal on one of the last kicks of the first half. The forward turned his defender on the corner of the six-yard box, but Galaxy goalkeeper Eric Lopez did well to parry the shot out for a corner kick.

Adam Saldana made it 4-0 after a long run through the LA Galaxy defense, basically against his own club team, and then a well-place finish from a shot at the top of the 18-yard box in the 55th minute.

Tayvon Gray made it 5-0 with an excellent header off a corner kick from Kobe Hernandez-Foster. Gray rose in front of his defender at the center of the six-yard box and smashed the shot right on frame.

Alfonso Ocampo-Chavez scored twice in the final 20 minutes of the game to push the scoreline to 7-0. The first goal came moments after Gray’s tally. Nico Carrera won a tackle in midfield, which jump started the attack. Ocampo-Chavez ended the chance as he went around the keeper and finished into the net.

The final goal of the game came from AOC on a nifty chip with backspin on a cross from Gray.

Bryang Kayo and Kobe Hernandez Foster were the only two players to play the full 90 minutes on Tuesday. Damian Las and Aaron Cervantes combined in goal to record the shutout - not sure either was credited with a save though.

Joshua Ramsey, Bryan Dowd, Seth Wilson, Axel Alejandre, and Tyler Freeman did not appear in the game. Daniel Leyva already left camp to return to the Sounders. He started for the MLS side in the loss over the weekend. The rest of the camp roster received some playing time in the game.

The USA U17 Men’s National Team is preparing for the 2019 U17 World Cup in Brazil, which kicks off on Oct. 26. USA takes on Senegal, Japan, and the Netherlands in Group D. USA qualified for the event after finishing as finalist at the 2019 U17 Concacaf Championship.