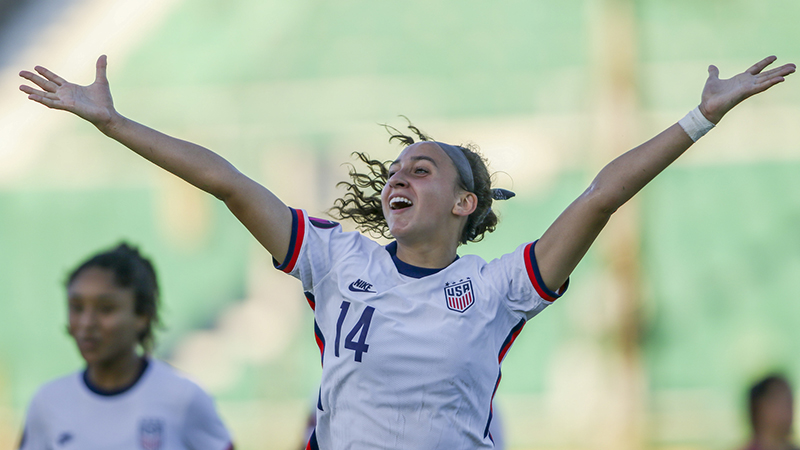 Taylor Suarez simply reacted first. Mexico goalie Carmen Lopez played her first — and only — bad pass of the night, rushing a clearance. Suarez anticipated it, controlling the ball before poking it to the feet of Melina Rebimbas.

And she complemented her teammate’s interception perfectly, pushing to her left before snatching a shot to Lopes’ right, rolling it into the bottom corner for a 2-1 lead in the Concacaf Championship final.

Her smooth finish was all the U.S. U17 WNT would need to beat a resolute Mexican side. After taking the lead inside 20 minutes, the U.S. seemed to have control of the game. But a Mexico equalizer with 25 minutes remaining brought the game to life. Lopez produced a few impressive stops, but was powerless against Rebimbas’ nifty finish.

With the victory, the U.S. capped off a Concacaf Championship in which they won all seven games, outscoring their opponents 58-1. More importantly, though, the U17s secured World Cup qualification, booking a ticket to India for later this year.

The first half was a mostly subdued affair of few clear chances. Mexico set up in a back five, and looked to hit on the break. Meanwhile, the U.S. buzzed and zipped ina 4-3-3 buzzed, spraying the ball around quickly, but struggling to find a good look.

After 20 minutes, the US found a breakthrough. Lauren Martinho seized onto a loose ball outside the box, cut onto her right foot, and shot across the keeper, the ball brushing her fingertips before kissing the bar and bouncing into the net.

⚽ What a goal by Lauren Martinho!

For the remainder of the half, a second seemed likely. Charlotte Kohler fired over. Amalia Villareal had a shot blocked by a last-ditch sliding tackle. Onyeka Gamero continued to tease on the right wing. Further chances came, too. But a couple of big saves from Lopez — including one from just five yards out — kept the game close.

This wasn’t a half devoid of attacking threat from Mexico, though. El Tri created some chances of its own. Tatiana Flores offered pace and energy in the channels, the Chelsea academy forward stretching a yet-to-be-tested US defensive unit. She forced a couple of brave tackles, but clear shots were few.

The second half proved a more intense period. Lopez was again called into action numerous times. Gamero cut onto her left foot and drew a diving stop. Kohler forced an instinctive block from close range. Every stop, every block, every shout at a lost marker, was crucial in the Mexico response.

And it was an emphatic one.

In the 65th minute, Maribel Flores gambled on a floated ball to the back post. The Slammers FC HB Koge striker took advantage of a brief moment of confusion among the US back line, and slotted the ball into the bottom corner, before careening away in celebration. It was a signature poacher’s goal, and one that brought the previously languid game to life.

Twelve minutes later, Rebimbas’ winner came. It was a smooth thing, the appropriate end of a quick interception and nifty pass from Taylor Suarez. And after finding the bottom corner, she met her teammates by the touchline, mobbed in celebration.

There was still some work to do, though. Mexico coach Ana Galindo shuffled her lineup in an attempt to push for an equalizer. But the U.S. responded comfortably, not allowing a shot in the final 10 minutes despite waves of pressure.

As the final whistle blew, Astrain ran down her subs bench, making sure every single player got a fist bump. It was the first time all tournament her squad had looked tested, pushed. But for every Mexico clearance — for every Lopez save — the US had another pass, another run, another shot on goal. That resilience was the difference on the day, the true discrepancy between two well-matched sides.

And fist bumps became screams of jubilation as the US lifted the Concacaf Cup.