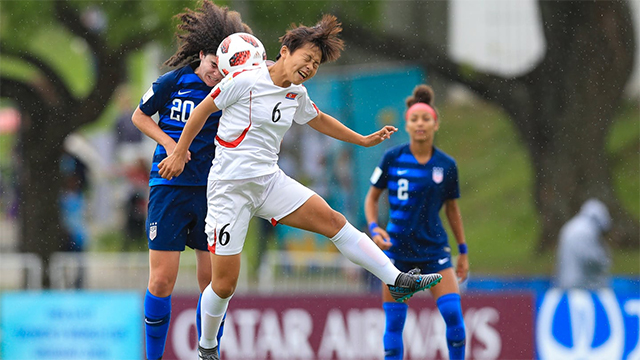 The U.S. U-17 Women's National Team fell 3-0 to Korea DPR in the second Group C match for both teams at the FIFA Under-17 Women's World Cup.

The loss means the USA is likely facing a must-win scenario against Germany in its group finale on Nov. 21 in Montevideo (3 p.m. ET on FS2 & telemundodeportes.com) to advance to the quarterfinals.

After a strong performance in the opener against Cameroon, the U.S. ran into a committed North Korean team which, despite handily out-shooting Germany, was stung by a 4-1 loss to the European power in its first game. Although the USA had a slight edge in possession, the physical Koreans did far more with the ball and were on the front foot for most of the match.

The U.S. defense held strong during the run of play, backed by another excellent game from goalkeeper Angelina Anderson, but set plays proved to be the USA's undoing as Korea DPR scored all three of its goals off corner kicks. The 2016 FIFA U-17 Women's World Cup champions scored on three of their five corner kicks in the match.

Ri Kum Hyang scored after a scramble in the penalty area in the 25th minute, Kim Yun Ok scored directly off a header in the 32nd and Kim Kyong Yong put the game away in the 52nd. The first two goals came off Korea DPR's first two corner kicks of the game.

Goal Scoring Rundown
PRK - Ri Kum Hyang (Kim Kyong Yong), 25th minute
On a corner kick from the right side, the USA couldn't clear the ball and North Korea got three cracks at goal, all of which were blocked. The fourth chance was struck on the ground through traffic past a sliding U.S. defender and into the lower right corner from 12 yards out. USA 0, PRK 1

PRK - Kim Yun Ok (An Kuk Hyang), 32nd minute
The Koreans' second goal also came off a corner kick from the right side. Kim Yun Ok darted open at the top of the six-yard box to redirect a well struck header into the goal, doubling the lead. USA 0, PRK 2

PRK - Kim Kyong Yong (Pak Hye Gyong) 52nd minute
On a corner kick from the left side, the USA let the service bounce inside the penalty area. Kim Kyong Yong did well to smoothly collect the ball and make space for her shot before driving her chance into the lower right corner from 16 yards out.