U17 WNT heads to Florida for training camp 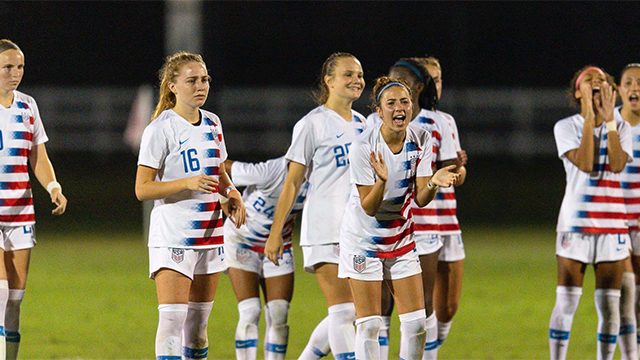 The U.S. Under-17 Women’s National Team will hold a training camp from January 5-15 as head coach Tracey Kevins brings in 28 players to kick-off the new year in Lakewood Ranch, Florida.

This will be the second-to-last event before Kevins chooses a 20-player roster for the Concacaf U-17 Women’s Championship to be held at the end of March.

The training camp roster features 24 players born in 2003, which is the birth cut-off year for players to participate in the 2020 FIFA U-17 Women’s World Cup that will be staged in India. Three players on this roster were born in 2004, including the team’s current leading scorer, forward Allyson Sentnor, and the youngest player is midfielder Olivia Moultrie, who was born in 2005. Moultrie signed an endorsement contract with Nike early in 2019 and became the youngest American female to turn professional. She trained with Portland Thorns FC of the National Women’s Soccer League last season and played matches with the Thorns U-18/19 Girls’ Development Academy Team. This is the 15-year-old’s first call-up to the U-17 WNT.

The U-17 WNT compiled a record of 9-1-1 in 2019 and will face England twice during its February training camp. At Concacaf qualifying, the USA’s group stage opponents will be Jamaica, Puerto Rico and Nicaragua. After that round-robin play, the top three finishers in each of the four groups will qualify for the knockout stage, joining the four group winners from the Qualification Stage in the Round of 16.

The knockout stage of the competition will be played in its entirety in a single match elimination format, with the top three finishers earning berths to India.

USWNT legend Heather O’Reilly, who retired from professional soccer after the most recent NWSL season in which she won the championship with the North Carolina Courage, will join Kevins as an assistant coach during the training camp.