U17 WNT heads to Korea for pair of matches 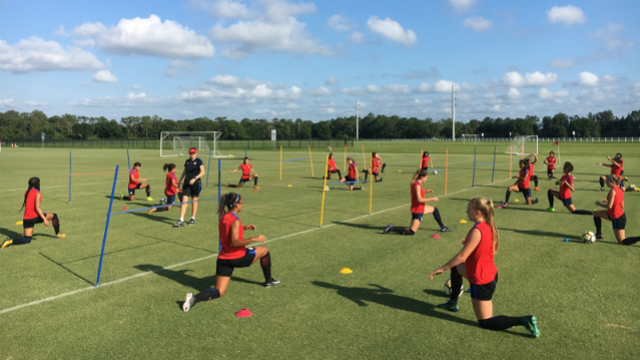 The U.S. Under-17 Women’s National Team will train at the U.S. Soccer National Training Center in Carson, Calif., from Aug. 8-11 before traveling to South Korea for two matches as the preparations for the 2018 FIFA U-17 Women’s World Cup continue.

U.S. U-17 WNT head coach Mark Carr has named 24 players to the roster, almost all of whom have seen significant time with the U.S. team this year. Thirteen of the players helped the USA win the 2018 Concacaf U-17 Women’s Championship.

The USA will travel to South Korea on Aug. 12 and face the Korea Republic U-17 WNT on Aug. 18 and Aug. 21 at a venue north of Seoul. Korea Republic has also qualified for the 2018 FIFA U-17 Women’s World Cup and was drawn into Group D with Spain, Canada and Colombia. South Korea finished second to North Korea in the 2017 AFC U-16 Women’s Championship to earn its berth to Uruguay.

The 16 teams that will participate in the sixth FIFA U-17 Women’s World Cup are host Uruguay, Brazil and Colombia from South America, the USA, Mexico and Canada from Concacaf, Ghana, Cameroon and South Africa from Africa, Korea Republic, Korea DPR and Japan from Asia, Finland, Germany and Spain from Europe, and New Zealand from Oceania.

U.S. U-17 goalkeeper Angelina Anderson, who played in four of the five matches at the Concacaf Women’s U-17 Championship, was initially named to this roster, but following an injury to 2018 U-20 Women’s World Cup goalkeeper Hillary Beall during the USA’s pre-tournament camp in France, Anderson was named to the U-20 World Cup roster and will be the youngest player on that squad.

The roster also features a pair of twins in Michela and Samantha Agresti, who play for FC Stars of Massachusetts. Michela, a member of the USA’s Concacaf qualifying team, has 12 caps and two goals for the U-17s. Samantha is uncapped.