U17 WNT one win away from World Cup berth Ninety minutes and a tough Panama side are all that stands between the U.S. U17 Women’s National Team and a spot at the 2012 World Cup.

Aside from a relatively stiff test from a tricky Mexico team on Monday, the U.S. U17s enjoyed a fairly easy romp through its three group games, outscoring its opponents 18-0. 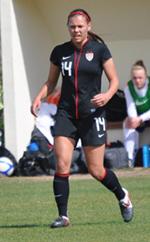 While the offense has done its share of the scoring, the defensive effort has been equally as impressive, allowing only five shots on goal through the first three games.

The defensive performance up to this point is a culmination of the preparations put in ahead of the tournament.

“It’s something we’ve been stressing for the last five months - that pride in defending as a team and limiting the other team’s chances,” head coach Albertin Montoya said after the win over Mexico. “I think we’ve done that very well for the last few months. We’ve had great preparation coming into this tournament and like I’ve said from the beginning, it’s a team effort. Our forwards are defending, our midfielders and our backs and Jane [Campbell] is as solid a ‘keeper as anyone in the world.”

The team has also managed to score early and often in all three of those games. Forward Summer Green’s tally of nine accounts for half the goals scored and leads the team, but Montoya has been pleased by the contributions from all over the field.

“We are very dangerous with all our forwards, our midfield, and even our backs getting forward,” Montoya said. “When we are on, we are a very difficult team to defend, but on any given day anything can happen so we need to stick to our game plan and go out there and execute.”

Along with Green’s goal-scoring antics, Margaret Purce, Andi Sullivan, Emily Bruder and Joanna Boyles have all found the back of the ‘net in the three group games.

The triumph over Mexico – by far the most difficult challenge of the tournament to that point – secured top spot in Group B for the USA, setting up the decisive semifinal against Panama.

“It means a lot because we have prepared so much for this as a team, on and off the field,” Green said of winning the group. “We are like a family. Any team that comes our way we are ready to take on and I think that’s the most important part. Just coming together as a team, knowing our strengths and our weaknesses and getting a win just feels great.”

With the group win in the bag, the stage is set for the semifinal (Thursday, 3:30 PM EST). A win against the Panamanians – which finished second in Group A with a record of 1-1-1 – secures the team its goal of qualifying for the World Cup.

And even falling short wouldn’t rule out the possibility of making the competition, as the winner of the third place game also qualifies for Azerbaijan, allowing a margin for error.

But Montoya and the team is hoping that this entire qualifying experience is simply a building block towards success later on in 2012.

“We’re trying to peak a little bit here [at qualifying], but if we get the job done we have another long road, five, six months for the World Cup if we’re fortunate enough to make it,” Montoya said. “We have to make sure we’re playing at a high level now but we’re still growing as a team because the job is only half done once we win CONCACAF.”