U17 WNT Player Ratings vs. Bahamas Opening CONCACAF qualifying, the U.S. U17 Women’s National Team rolled past Bahamas 10-0, thanks to five goals from Summer Green and a Midge Purce hat trick.

Here’s a look at how the team fared in its first test at the U17 CONCACAF Qualifying Tournament.

Jane Campbell, Goalkeeper, 6 – Touched the ball a handful of times throughout the entire game, as Bahamas failed to register a shot on goal. 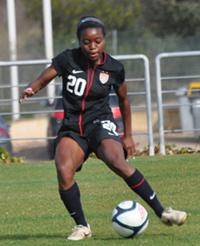 Brittany Basinger, Defender, 7 – The attacking right back got up and down the flank with relative ease and contributed very well to the attack.

Madeline Bauer, Defender, 6 – Very little for the defense to do all day, though when she did have the ball at the back, Bauer was sure to keep it on the ground and wasn’t just lumping the ball forward.

Miranda Freeman, Defender, 6 – Like her central defensive partner, Freeman hardly touched the ball all game, was cool and composed all day.

Gabi Miranda, Defender, 6 – Didn’t get forward as much as Basinger on the left, keeping it neat and tidy on that flank, picked up an assist on one of Purce’s goals.

Morgan Andrews, Midfielder, 9 – Sitting in front of the back four, part of the reason the defense had so little to do was credit to her shift. Her passing was sublime, as she sprayed balls all around the field, and the post the only thing denying her from a tremendous goal from distance in the first half.

Lauren Kaskie, Midfielder, 7 – Buzzed around the center of the park in her 45-minute shift in the middle of the park, winning balls and moving things forward towards the Bahamas goal.

Sarah Robinson, Midfielder, 7 – Another central midfielder, Robinson was tireless throughout her shift, picking up loose balls and setting up teammates, which she did on a few occasions.

Margaret Purce, Forward, 8 – Finished the game with a hat trick, and opened the scoring 39 seconds in, running behind the defense and winning a 50-50 ball to finish past the goalkeeper.

Emily Bruder, Forward, 6 – Had something of a frustrating afternoon, missing more than a few chances to hit the back of the net. She got into a number of good spots which should be encouraging.

Summer Green, Forward, 9 – The U.S. hit a rough patch in the early stages of the first half after jumping out to a great start. But Green stepped up as the team struggled to hit the back of the net, scoring four before the break and adding one in the second half before coming out in the 70th minute.

Morgan Stanton, Midfielder, 6 – A very solid performance in the second half for Stanton, who came on at the break and the team didn’t miss a beat.

Andi Sullivan, Forward, 7 – Played the second half after coming on for Bruder and added a threat on the flanks. Scored herself as well when the Bahamas goalkeeper couldn’t hold on to her shot from distance.

Toni Payne, Forward, 7 – Entered with around 20 minutes left in the second half and put in a hustling shift, setting up Purce’s second goal of the game and grabbed a goal for herself.