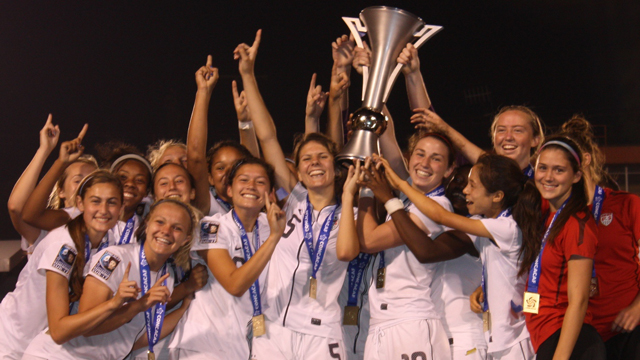 In the first week of May, the U.S. Under 17 Women’s National Team took Guatemala and the CONCACAF qualifying tournament by storm.

En route to a spot in the U17 Women’s World Cup and a tournament, the U17 put in a dominant performance, outscoring the opposition 26-0 across five games.

Now, with a few weeks passed and the dust of the tournament settled, coaches and players alike fondly recalled the two weeks competing in Central America. 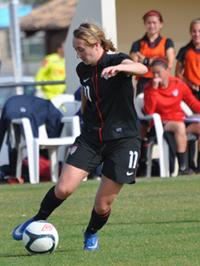 “We played well at times, I think there were other times where we could have done a much better job, but that’s what these tournaments are about, we learn a bit more about the team, certain things we need to work on,” head coach Albertin Montoya told TopDrawerSoccer.com.

“I thought in the final [a 1-0 defeat of Canada], in the second half, we panicked a little bit and didn’t actually keep the ball as well as we would have liked, and then Canada put us under quite a bit of pressure, but with all that being said, our defense held strong and we found a way to win the tournament which shows a lot of character.”

Added midfielder Sarah Robinson: “I thought playing in Guatemala was one of the most exciting soccer playing experiences I have ever competed in. The level we were playing at was so high, and we were representing our country to try and get a spot in the World Cup.”

And while getting that spot in the Cup – which was secured by winning the semifinal against Panama – was the primary objective, this group of girls wasn’t satisfied unless they won the whole thing.

“I think I can speak for the team when I say that we are a highly competitive group,” midfielder Jo Boyles wrote TopDrawerSoccer.com in an email. “To have gone to the CONCACAF and not bring home the trophy would have been very disappointing. Whenever we play, we play to win. In a tourney situation, we're there to be the best.”

There was a number of standouts for the U.S. down in Guatemala – Summer Green, who lead the forward pack with 12 goals, Brittany Basinger, an energetic and shutdown left back who played almost every minute of the tournament, Madeline Bauer, calm and composed in the heart of defense, and Morgan Andrews, who roamed the holding midfield spot, spraying balls all over the field, to name just a few.

However, it was truly an entire team effort in lifting the trophy, as playing five games in a short span required the use of 19 of the 20 players on the roster (backup goalkeeper Carissa Miller the lone exception).

And that kind of complete team effort is perhaps best embodied by the team’s defensive record. Across the five games, the U.S. conceded zero goals and for the most part there was little for ‘keeper Jane Campbell to do.

“It’s a combination of a commitment to defending all the way from our forwards to our goalkeeper,” Montoya said about the defense. “It’s something that we’ve really spent a lot of time on and we take pride in defending as a team. And they all worked extremely hard for each other. That’s going to help them also in the World Cup, it’s just a mentality about them that we’re going to limit other team’s chances.”

Naturally, the biggest news on the offensive side of the ball for the U.S. was the play of Summer Green. In all but the final against Canada – where she assisted on the game winner – she scored in every single game, including five goals against the Bahamas and a hat trick in three games.

Heading into the tournament, however, Green’s confidence was low, and according to her head coach, she was in danger of losing her spot in the starting lineup before the tournament began.

“We definitely knew that she was capable of doing it,” Montoya said of her performance. “Did we really expect her to put on such a performance? Not necessarily. When we got to the tournament, Summer was in a little bit of a slump and having a difficult time scoring. She was going through a tough time, she was trying to do too much, and she was a little bit down in the last couple camps.

“She was even on the bubble whether she was going to start or not because of the cold streak she was going through. But obviously, she’s one of our top forwards and we made the decision she must start, and like what happens to forwards so often, forwards are somewhat streaky, she got hot at the right time.”

Green, who paid tribute to her teammates for helping her score so many goals, said she tried to return the favor as much as she could throughout the tournament.

“I was able to put away some shots helping our team but I also wanted to try to get my teammates in because that is exactly what they did for me,” she told TopDrawerSoccer.com.

However, the decision to play her from the start ended up paying obvious dividends, and as a result, the U17 WNT now has three months before traveling to the World Cup this September in Azerbaijan.